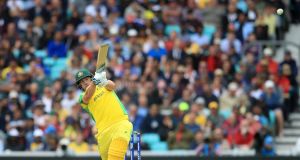 Captain Aaron Finch’s brilliant 153 and ruthless pace bowling by Mitchell Starc led Australia to an emphatic 87-run victory over Sri Lanka in the Cricket World Cup at The Oval on Saturday.

Finch and Steve Smith (73) shared a fine partnership of 173 to lead the defending champions to an imposing total of 334 for seven.

Sri Lanka, attempting a World Cup record run chase, faded after a bright start and Starc picked up four wickets as they were bowled out for 247 in the 46th over.

Australia’s fourth win of the tournament lifted them top of the 10-team standings while Sri Lanka stayed fifth with only one win from five matches.

“I thought we were a tad short with the new ball and it’s so hard to pull it back after that. We were a bit slow to change our plans and lost a bit of momentum,” man-of-the-match Finch said.

“With each game we’re improving. Through the middle overs today we were excellent with the way we pulled it back with our pace bowlers. Mitch was all over them, he is a world-class bowler,” Finch added.

After Sri Lanka had won the toss, Finch and David Warner shared a solid opening partnership of 80 before Warner, on 26, was bowled by spinner Dhananjaya de Silva.

Usman Khawaja was caught at square leg off De Silva for 10, bringing former captain Smith to the crease.

Finch launched De Silva for successive sixes and the right-hander lifted Milinda Siriwardana for another maximum to reach three figures off 97 deliveries.

Finch moved past 150 and must have had his sights on a double century when he skied Isuru Udana to extra cover after hitting five sixes and 15 fours.

Smith was bowled by Lasith Malinga as Australia’s momentum stalled briefly but despite a flurry of late wickets, Glenn Maxwell’s quickfire unbeaten 46 ensured his team posted a very competitive total.

Sri Lanka’s reply started well as Dimuth Kurunaratne and Kusal Perera took the score to 115-0 in the 16th over.

Perera, however, was bowled by Starc for 52 and Lahiru Thirimanne laboured to 16 before edging Jason Behrendorff to wicketkeeper Alex Carey.

Kurunaratne was three runs short of his century when he cut Kane Richardson to Maxwell at backward point and Angelo Mathews gloved Pat Cummins down the leg-side to Carey for nine.

Starc picked up two wickets in an over, bowling Milinda Siriwardana for three and getting Thisara Perera caught at mid-on for seven, and the left-arm seamer had Kusal Mendis caught by Carey for 30 as Sri Lanka’s last eight wickets fell for 61 runs.