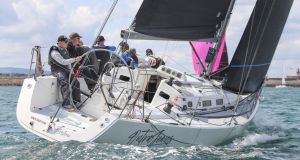 The J109 Outrajeous from Howth Yacht Club is an early entry into June’s 2020 Round Ireland Yacht Race. Photograph: David O’Brien

As entries open this week for the Round Ireland Yacht Race, 13 have entered almost immediately, with some exotic charter boats expected to add extra spice to the Wicklow Sailing Club startline this June.

While there is expected to be reliable support for the second-longest race in the Royal Ocean Racing Club calendar, there is also a keenness to confirm entries for the Irish bluewater classic as early as possible because offshore passage races, such as a new fixture from Dún Laoghaire to Cork, plus a Morgan Cup race from Cowes to Cork, are all vying for offshore numbers this season.

The winner of the 2018 edition, Niall Dowling from Dublin’s Royal Irish Yacht Club, has confirmed his intention. The Lombard IRC 46 Pata Negra is one of several international performers shortlisted for the 700-mile non-stop race. Such an entry, if it materialises, would undoubtedly heighten competition in the 20th edition, under new sponsor SSE Renewables.

The current course IRC monohull record was set in 2016 by American maxi skipper George David on Rambler 88 in a time of two days, two hours, 24 minutes and nine seconds. The race starts on Saturday, June 20th.

In Australia, Olympic silver medallist Annalise Murphy has returned to her usual place on the podium by taking the runner-up position at Sail Melbourne in the Laser Radial class this week. It followed a 12th in a mixed 63-boat gold fleet at the Australian Nationals a fortnight ago.

An Olympic trial will be held between four Irish contenders, including the National Yacht Club star, for the single Tokyo berth starting in Genoa this March, the only Irish class so far to secure an Olympic berth.

Miami is the final opportunity for North Americans to qualify for Tokyo 2020. But, the final stop of the 2020 Hempel World Cup Series in Genoa is the last shot for Europeans – McClelland included.

Top youth sailor Chris Bateman leads after the first day of the 2020 Monkstown Laser Frostbite League from a fleet of 13 in Cork Harbour, but there was no such racing last Sunday on Dublin Bay due to no wind at Dún Laoghaire.

In the absence of the London Boat Show, Irish yacht brokers made a resurgent return to Boot Düsseldorf, Germany, this week, where the European Boat of the Year Awards were established. There are reports of strong Irish attendance at the world’s biggest indoor boat show, which continues until Sunday. Co Wicklow firm BJ Marine of Greystones Harbour was quick off the blocks to sell the first Oceanis 30.1, the new Beneteau sloop that won the family cruiser category at the awards.