Footbridges, stiles and ladders installed along the river at a cost of €23,500 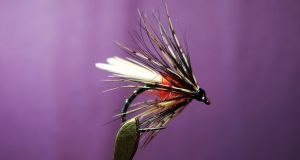 The Duckfly – one of the first fly hatches of the season. Tied by Jimmy Tyrrell (irishflycraft@gmail.com).

A new project to improve angling access on the River Easkey in Sligo has now been completed.

The venture, which was delivered by River Easkey Angling Association, received support from Inland Fisheries Ireland (IFI) via the National Strategy for Angling Development.

Structures such as footbridges, stiles and ladders are installed along the river while walkway routes have also been improved. The work took place upstream of Workhouse Bridge which initially involved similar works downstream of the bridge last year.

Alan Spencer of Easkey Angling Association, added: “The club wishes to thank the fisheries staff for their help and support and to express its gratitude to those landowners who kindly permitted the club and its contractor access to the river through their property.”

The new byelaws, which came into effect on 1st January 2019, will replicate the current level of protection for salmon stocks until a decision is made by the Welsh government following application for the introduction of more protective catch controls.

First salmon catch of the year
Apart from Michael McCann’s catch of the first salmon of 2019 on the Lackagh River in Co Donegal on January 1st, there are unconfirmed reports of one or two fresh salmon caught on the River Flesk in Co Kerry.

However, with a host of additional salmon fisheries open for business from last Friday (1st February), hopefully, more returns will be forthcoming.

Accounts of catches from yesteryear
Following last week’s initial report from the first handbook of the Irish Federation of Sea Anglers printed in 1957, the following are some more excerpts.

The specimen fish committee report of 1956 (founded in 1955) shows that eight sea fish were caught (in 2017 the figure was 420!). The most notable of these included a hake caught by John McKay of Bangor AC at 15lb 2oz.

Another noteworthy catch was that of a 205lb skate at Kinsale by A Bowie of Dun Laoghaire SAC. Captain Saul boated a turbot of 23lb 8oz also at Kinsale and Capt O’Toole caught a very nice cod of 26lb 12oz at Greystones.

A haddock of 5lb was taken by Jack Lyons at Kinsale and a mackerel of 2lb 11oz fell to Prof J O’Rourke at Lough Eyne.