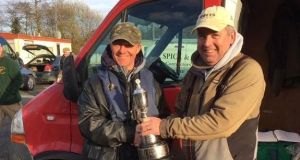 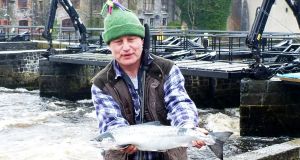 Gerry Seck, with first salmon of the season from the River Moy 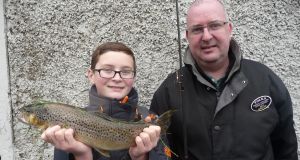 Gavin Maguire (11) with his dad and winning trout of 1.6kg at Tolka opening day 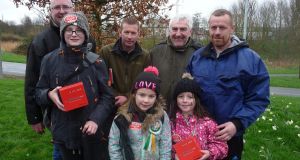 It was great to be back on my old stomping ground on St Patrick’s Day for the Tolka Trout Anglers’ Association (TTAA) opening day competition. It was here on this beautiful river many years ago that I cut my teeth with the sport and the experience has stayed with me ever since.

At this year’s event it was obvious the festivities surrounding our national holiday and the inclement weather did little to deter the huge turnout from early morning. While angling focused mainly on the Finglas and Blanchardstown areas, the view from Cardiffbridge was one of intense angling activity on both riverbanks.

Opening day is all about families and this year an estimated 100-plus men, women and children ventured out in difficult conditions. The local club made a point of stocking the river prior to opening day with brown trout to enhance the resident wild fish which, in turn, ensured a good catch return.

In 2014, thousands of brown trout, sea trout and stickleback perished because of a major pollution spillage from the Finglas Bridge area downstream. It was therefore great to see a selection of overwintered trout caught on the day.

Later, at the Dublin Corporation Depot in Tolka Valley Park, those fortunate to catch fish gathered for the weigh-in, each presenting their biggest fish, under the supervision of IFI staff. All juniors with fish received a selection of rods and reels as prizes.

Christy Emmett, TTAA chairman, said: “I would like to thank you all for coming along today. Today is all about the kids. I would also like to thank IFI for their sponsorship in providing the junior prizes and Des Chew for his assistance in organising the day.”

At the final count, the best fish out of 18 went to local angler Gavin Maguire (11) with an overwintered cracking trout of 1.3kg.

First fish on the Moy

Gary Piggott of Ridge Pool Tackle Shop presented a prize to Mr Seck who, in turn, presented the fish to the Ballina Manor Hotel who made a substantial donation to the River Moy Search & Rescue Club.

The competition is held in memory of Richard Anthony Kilroy, who was somewhat of an icon in that he was secretary of LSTPA from the 1920s to late 1960s.

“Sonaghan will not move out to the deep until the daphnia starts to bloom, which is at least a month away,” according to fisheries officer Lindsey Clarke.

During the 2015 season the study surveyed 207 anglers and found that, on average, each spent €114 per day. The impact of this expenditure is far reaching across the local community with €451 paid out on non-angling items and €193 on items such as angling guides, boat hire and equipment.

The majority travelled to Waterville with friends or family with two thirds of their party fishing during their stay. They came from Britain (17.5 per cent), Europe (5 per cent), other overseas areas (2 per cent) and Ireland (75.5 per cent).

IFI’s chief executive, Ciaran Byrne, said: “Waterville is one of Ireland’s many precious fishing locations. This research confirms that angling is bringing huge economic value to this rural community. Anglers also tend to develop a relationship with an area which can lead to them taking multiple trips per year.”