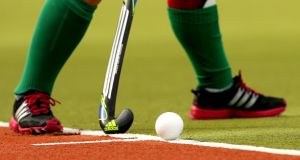 St Andrew’s completed a notable treble this year as they added the Leinster Senior Cup to All-Ireland title and league honours.

Ben Bradley’s brilliant diving save saw St Andrew’s eventually prevail to complete an amazing schoolboy treble as they beat Wesley 6-5 in a shoot-out after the game ended 2-2 in normal time.

He guessed correctly in the sudden death shoot-out to deny Jack O’Grady and help the school add the Leinster Senior Cup to the All-Ireland title won last October and the league won in February.

Twice Wesley had led; twice they saw goals disallowed but twice, crucially, Andrew’s replied in kind to give themselves their chance at glory.

Andrew Sykes close-range finish gave the Ballinteer side a seventh minute lead only for John Guilfoyle to score from a cracking team move moments later.

In the second half, both Iain Patterson and O’Grady had goals disallowed for using their body but Wesley did go in front courtesy of Mark Samuel’s deft corner deflection from a Gavin Gibney drag.

Guy Sarratt levelled from the penalty spot, setting up a lively closing 10 minutes but no further goals accrued in normal time nor in extra time.

All five rounds of strokes in the shoot-out were scored and Sarratt duly netted in the sixth round before Bradley made his heroic save for the win.