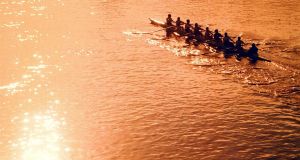 Trinity novice men’s eight took the Dan Quinn Shield in a fine race which was in the balance down the course. Photograph: Don MacMonagle

UCD Boat Club capped a very good week with an impressive win for their senior men’s eight in the Gannon Cup colours race against Trinity on the Liffey on Saturday. The crew, stroked by David O’Malley, took the lead not long after the start at O’Connell Bridge and had three lengths to spare come the finish at St James’s Gate.

Both crews had to contend with a powerful, gusting, headwind and choppy water. UCD’s performance is all the more admirable as O’Malley, Shane O’Connell and Shane Mulvaney are lightweights - indeed all competed for Ireland at the World Championships as under-23 lightweights.

A man who is a bona fide heavyweight, Eoghan O’Connor, started the St Patrick’s celebrations early for UCD. He set an excellent time of five minutes 56.9 seconds in his ergometer test for Ireland selection on Thursday. O’Connor does not qualify for the Gannnon Cup, as he is not a current student.

The 2017 Colours Races did have some impressive Trinity performances. Their novice men’s eight took the Dan Quinn Shield in a fine race which was in the balance down the course.

The women’s novice race, for the Sally Moorhead Trophy, also went to UCD. Trinity started well and led through Capel Street Bridge. UCD followed them through ‘their’ arch - which might have meant disqualification, but the bridge’s arches had not been marked as they should have been. UCD, who were well ahead at the finish line, were given the result.