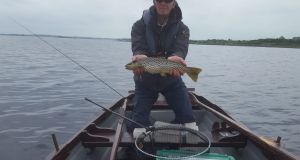 Catch of the day: Philip Kavanagh from Co Meath with a cracking trout from Lough Corrib.

Applications are invited towards a new funding scheme that aims to support groups who offer young people and novice anglers the opportunity to participate in the sport of angling. Angling for All carries a total value of €120,000 and opened for business last Monday.

The grant allocation is supported by the Dormant Account Fund and limited to €5,000 for any eligible project. Groups invited to apply include angling organisations; clubs within the Republic of Ireland; hubs as a start-up grant, local community groups and not-for-profit organisations.

The funding call will remain open until October 13th, 2020, and awards will be subject to budget availability and adherence requirements. Applications must be done through the online application process. To apply, visit www.fisheriesireland.ie/afa.

‘I fell in love with lifeboats’

Denise Lynch, a lifeboat crew member with Fenit RNLI in Kerry, has been “passed out” as a coxswain and becomes the first woman to be appointed to the role in the country. Denise began as a volunteer in 2001 and has served on both inshore and all-weather lifeboats at Fenit.

On her appointment Denise said, “From the day I visited the station in primary school, I fell in love with lifeboats. It’s no big deal to my male crew colleagues that a woman is in this role. They know I can do the job and I’m there for them, whatever happens. I hope it encourages more people to volunteer.”

There are 155 female lifeboat crew in Ireland and the charity is looking to recruit more volunteers for a variety of sea-going and station roles.

Fenit lifeboat operations manager Ger O’Donnell said: “Denise is a great addition to our coxswain team and has been a valuable member of the lifeboat crew for many years.”

Anyone interested in joining the RNLI can find further details at www.rnli.org/volunteer.

The Board of Inland Fisheries Ireland (IFI) has announced the appointment of Francis O’Donnell to the position of chief executive. Francis is currently director of the IFI’s Western River Basin District.

Prior to rejoining the inland fisheries service, Francis was CEO of the Irish Fish Producers Organisation and also worked with the Sea Fisheries Protection Authority.

Dr Ciaran Byrne recently stepped back from his role as CEO of IFI having completed two terms, and has now taken up a different role within the organisation.

Natural Resources Wales (NRW) has announced that close to 30,000 people now hold a fishing licence in Wales. There was a bumper growth of 18 per cent in junior licences, on top of a 3 per cent year-on-year increase of adult licences sold.

The rise is attributed to existing anglers taking the opportunity to start fishing again, together with those taking up the sport for the first time.

Peter Gough, principal adviser at NRW, said: “Getting people involved not only contributes to their physical and mental wellbeing but also helps them connect with nature. There are hundreds of community-based angling clubs across Wales and promoting angling opportunities is an important part of sustaining our fisheries.”

Working in partnership with Angling Trust and Visit Wales, NRW has created a new information website: a one stop shop source of information called Fishing in Wales.

The Rosses in Co Donegal is one of Stuart McGrane’s favourite fishing venues. Any opportunity he gets he’s off for a few days of pure enjoyment. The Rosses is an area in west Donegal in the barony of Dungloe and blessed with a plethora of wild and wonderful trout lakes.

Lough Craghy (sometimes called Tully Lake), is one of his favourite lakes and it was here Stuart spent some time recently. The day in question was quite sunny but with a good wind. He was rewarded with a beautiful conditioned wild brown trout of 2.5lb which opted for a size 12 Claret Bumble. Following a quick photo, the fish was sportingly released.