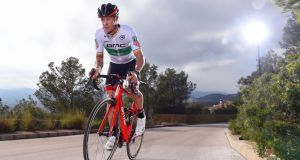 Having got his racing underway last week in the Volta a la Comunitat Valenciana, Nicolas Roche has given an assessment as to where his current form is – as well as an outline of his likely big season goals.

He and his BMC Racing Team claimed victory last Wednesday in the opening team time trial. Roche was sitting fifth overall heading into last Friday’s stage, but then slipped back and switched to playing a team role for Ben Hermans.

“I felt, like most of the years, that it is still pretty early in the year for me,” said Roche.

“It was no different to any other year, really. Just get in there, get some rhythm, do some work. Obviously after winning the TTT I was saying maybe we will see how the legs are, I might try and fight for the general classification.

“But at the end of the day I quickly realised that I wasn’t in the rhythm for a good GC. So in a team like BMC it is also important to give a hand to someone who has the legs.”

Roche ended up helping team-mate Hermans to a superb second overall, while also helping to build his own condition.

“My form is pretty much the same as other seasons,” he said. “Not worse, not better. Hopefully it will evolve over the next month or so. I need to be stronger for Paris-Nice. Richie [Porte, the team leader] is really aiming for Paris-Nice so I want to be there in top shape and start doing some good work in the mountains.”

Roche moved from Team Sky to the BMC Racing Team over the winter. One of his main motivations in doing so was to have more personal opportunities.

In other news, Irish pro team Aqua Blue Sport is aiming to build on its recent fine debut in Australia. It clocked up stage placings of second, second and third in the Jayco Herald Sun Tour, including a runner-up slot by Irishman Conor Dunne.

Dunne will join five others in Sunday’s Trofeo Laigueglia in Northern Italy.

Meanwhile another Irishman, Matt Brammeier, will be part of an eight-man squad in the Tour of Oman, which begins next Tuesday and runs for six days.

Finally, Race Across America champion Nicole Reist has been confirmed for the Race Around Ireland. It begins on August 27th in Co Meath and will comprise 2,150 kilometres in total.

1 Ireland to stick with winning formula against England
2 Lewis Ludlam eager to make his presence felt for England
3 Should fans be allowed drink in the stand at sporting events?
4 Brian O’Driscoll accuses England boss Eddie Jones of ‘scaremongering’
5 On healing and wild hurling: The re-education of Diarmuid Lyng
Real news has value SUBSCRIBE