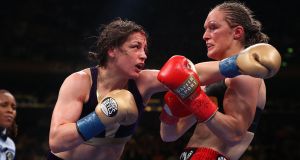 Katie Taylor will put her status as undisputed lightweight champion on the line in a rematch against Delfine Persoon on the Dillian Whyte-Alexander Povetkin bill on August 22nd.

Taylor added Persoon’s WBC title to her WBA, IBF and WBO crowns at Madison Square Garden in June last year after a razor-thin majority decision verdict, but this time around it will be a more low-key affair behind closed doors in promoter Eddie Hearn’s back garden in Brentwood, Essex.

With a high-profile showdown against Amanda Serrano falling through, Taylor was adamant she wanted the next best alternative and aims to prove once and for all that she is the premier 135lb fighter on the planet.

“With Amanda Serrano not taking the fight I wanted the biggest fight possible in August and I think a second Persoon fight is one that everyone wants to see,” said Taylor, who has won all 15 of her professional contests.

“I’ve been looking forward to a rematch ever since the first fight and I’m delighted it’s been made.

“It was definitely very close first time around, but I felt I deserved the win and I intend to leave no doubts in the rematch.”

Persoon (44-2, 18KOs) is undaunted by the challenge as she said: “I am ready to get the victory following the injustice last June in New York, not by words but in the ring – I am ready!”

Since beating Persoon, Taylor has fought once, moving up to super-lightweight and becoming a two-weight world champion after outpointing Christina Linardatou for the WBO’s 140lb title.

And promoter Eddie Hearn is looking forward to seeing the Olympic champion attempt to settle her rivalry with Persoon, saying: “Wow! What a fight – what a night! To be honest I can’t quite believe this fight has been made.

“I can’t give enough credit to Katie and Delfine for agreeing to do it again. Since their epic fight of the year contender at MSG last year, everyone has wanted to see this once again and now we have it.

“I’m very proud to stage this fight especially at such a critical time for our sport – along with Whyte vs Povetkin, August 22 will be one not to forget.”