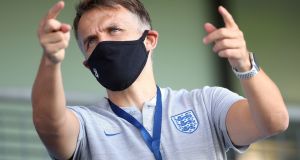 Phil Neville is to step down as head coach of England Women with immediate effect. File photograph: PA

Phil Neville has been appointed as the head coach of Inter Miami, leaving his role as England women’s team manager early and throwing the Football Associations’s plans for the summer Olympic Games up in the air.

Neville had been expected to leave his role with the Lionesses this summer, and to coach the Team GB women’s side at the rescheduled Tokyo Olympics. Instead he will now join the MLS side, co-owned by his friend David Beckham, with immediate effect.

“I am incredibly delighted for this opportunity to coach Inter Miami,” Neville said. This is a very young club with a lot of promise and upside. This fantastic soccer-loving market deserves consistent performances and a winning mentality, and I look forward to getting to work.”

Neville leaves the Lionesses after three years, a fourth-placed finish at the 2019 World Cup and one trophy, the She Believes Cup of the same year. Over the course of his tenure, however, England’s world ranking slipped from third to sixth.

Earlier this month the FA’s head of women’s football, Baroness Sue Campbell, told the BBC that Neville was expected to take charge of Team GB for the Tokyo Olympics. The FA must now find both a coach for the Olympics and a temporary replacement for the women’s team, with the new full-time manager Sarina Wiegman not taking over herself until after the games, where she is to coach the Netherlands women’s side.

Neville had previously said it was a “massive ambition” of his to manage a Great Britain team at the Olympics, but he was sounded out about the Inter Miami role this month.

Beckham said: “I have known Phil since we were both teenagers at the academy.

“We share a footballing DNA having been trained by some of the best leaders in the game, and it’s those values that I have always wanted running through our club.

“I know his qualities as a person, his decency, loyalty and honesty - and his incredible energy and work ethic. Anyone who has played or worked with Phil knows he is a natural leader, and I believe now is the right time for him to join.”

Following the news of Neville’s departure, Campbell thanked him for his work with the Lionesses. “After steadying the ship at a challenging period, he helped us to win the SheBelieves Cup for the first time, reach the World Cup semi-finals and qualify for the Olympics,” Campbell said.

“Given his status as a former Manchester United and England player, he did much to raise the profile of our team. He has used his platform to champion the women’s game, worked tirelessly to support our effort to promote more female coaches and used his expertise to develop many of our younger players.”

Speaking of his time with the national side, Neville said: “It has been an honour to manage England and I have enjoyed three of the best years of my career with the FA and the Lionesses. The players who wear the England shirt are some of the most talented and dedicated athletes I have ever had the privilege to work with.” – Guardian