OCI election a battle between old guard and those seeking change

Pat Hickey supporters among candidates for office despite Deloitte’s recommendations 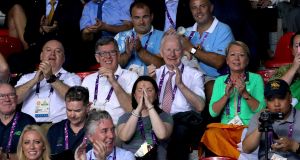 At the close of business on Wednesday the names of candidates seeking officer positions and the presidency of the Olympic Council of Ireland (OCI) will be finalised.

Those names will not be available to the public until Friday but it is already known that swimming’s Sarah Keane and archery’s Willie O’Brien are going forward for election in Dublin’s Conrad Hotel on February 9th.

For the first time since 1989, long-standing president Pat Hickey will not be running in the election.

It is expected that OCI general secretary Dermot Henihan will also be among the candidates seeking an officer position in the organisation.

A number of other officials from affiliated federations, including former FAI CEO and current basketball chief Bernard O’Byrne, will also be added to the presidential ticket.

However, O’Brien and Henihan’s inclusion on the list of nominees has the capacity to cause some controversy as their candidacy for officer positions flies in the face of Deloitte’s review of OCI governance, which was commissioned by the OCI in the wake of the Rio ticketing scandal and seen by The Irish Times last October.

The executive summary of the Deloitte report makes 19 key recommendations, one of which, number nine, refers to “Terms of Office”.

The report is unambiguous in its finding and recommends term limits for all executive committee members, including officers, of “two four-year terms”.

It continues: “This provision should allow for an extension of a third term in defined exceptional cases only, and not allow any executive committee members to serve for more than a 12-year period, to include consecutive or accumulated time.”

O’Brien and Henihan are loyal Hickey supporters. Interim president O’Brien, whom Hickey had hand-picked as his successor, now hopes to stay in the role he inherited through to the 2020 Olympics in Tokyo.

He has been an OCI executive member since 1996 and a stint as president up to the next Olympics would take him to the 24-year mark. Henihan also has around 20 years of service on the executive committee and if elected will also touch the 24-year milestone, which is twice Deloitte’s maximum recommendation.

Keane is from the new wing of the executive, which was split down the middle in the aftermath of the Rio ticketing scandal. A former national swimming champion and currently chief executive of Swim Ireland, she was part of the original three-person crisis management committee (CMC) that was set up in the immediate aftermath of Hickey’s arrest in Rio.

In November, Keane and two other members of the CMC challenged a letter penned by Henihan, who was party to setting up the CMC, which attributed the spiralling legal and expenditure costs to the crisis committee. Relatively fresh-faced, Keane has been an OCI committee member for over two years.

The possibility of an individual taking their tenure to the 24-year-mark and closing in on that of Hickey, who was president for 28 years, would undermine the credibility of the OCI, given how clear Deloitte were on the issue.

“There is strong evidence that organisations benefit from term limits,” said the review. “It prevents the dominance of one viewpoint or mode of thought, it is demonstrably fair to all, and it encourages a renewal and refreshment of governing body thinking and skills.”

What may be compelling when it comes to voting, which has traditionally fallen the way of Mr Hickey and his supporters, is that 96 per cent of OCI stakeholders surveyed said there should limits to the terms of office for members of the OCI executive committee.

There is little word coming from the OCI as it is divided and there can be no common voice. What is known is that the February election will be a battle between the past and those embracing Deloitte and regime change, which the voting federations will decide.

The three executive committee members who resigned their positions in the aftermath of Rio – second vice-president John Delaney, honorary treasurer Kevin Kilty and CMC member Ciarán Ó Catháin – will not be going forward for re-election.

“All names will be in by Wednesday evening,” said an OCI spokesperson. “They will then be assessed by our legal advisers. We will then advise the various sports federations and the media, and that will take place on Friday.”

Deloitte Report: The OCI appointed Deloitte to conduct an independent review of the organisation’s governance arrangements. The report has been delivered.

Grant Thornton Report: An independent review triggered by the OCI into the handling of ticketing arrangements for the Rio Olympics was postponed after lawyers for former OCI president Pat Hickey threatened to apply for a court injunction.