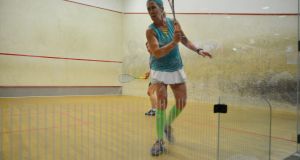 Orla O’Doherty: “I don’t know if they think I’m nuts or are they inspired. I would hope that they say ‘if Orla can do this at 48 I hope I can keep going’.”

On her way to victory in a Masters Squash tournament in Malta, Orla O’Doherty spotted her childhood coach standing with Irish fans.

“You’re still playing,” he said, “and you’re smiling. I’d never have expected that.”

Telling the story now, she shrugs and says he has a point. At 48 she is playing the best squash of her career, but more than that she has found a love of the game that escaped her as a teen.

O’Doherty had drifted into a successful coaching career until about three years ago a mini-stroke reminded her just how brief life can be. Today she holds the European Masters title and is getting ready for the worlds later this year.

O’ Doherty has gone from being a self-described “messer, a crowd pleaser” as a teenage player to discovering competition can be fun and successful.

In the last year she’s won tournaments in Malta, Spain, Slovenia, Ireland, and the British Open. This year opened with gold in Portugal just a few weeks ago.

Squash runs on seeding so it’s all about getting into the top four and being well-placed for a title-shot at the World Championships in August. Where the younger O’ Doherty was content with placing, now she feels time ticking away from her.

She’s working for every result and Professional Squash Association data shows players covering over one kilometre per game. Over 40 per cent of that is done going backwards at speed while hitting a ball. Nowhere to hide.

So, summer now means the gym instead of the beaches in her native Portmarnock. She plays squash with Sutton Women’s Premier and the men’s Division One at ALSAA.

Training with her coach Eoin Ryan has its own language. Sharpening is placing the ball so her opponent runs and runs. Then ‘ghosting’ where she works the courts without a ball, drilling until the racquet seems to move by itself.

Performance coach Cliodhna O’ Connor has taught her how to control her nerves and energy; something O’ Doherty says has been the biggest change. She’s the first to admit her career has taken a few twists and turns but this latest chapter is about peace.

The Masters category starts at 35 years of age and runs all the way up to the over-80s. But she also plays on the senior circuit, where players are closer to 20 than 50.

She says: “The nice thing is I have a really good rapport with these younger ones. I don’t know if they think I’m nuts or are they inspired. I would hope that they say ‘if Orla can do this at 48 I hope I can keep going’.”

O’Doherty came in fourth at the Senior Nationals earlier this month, joking about the 29-year age gap with one of her opponents.

Her own twenties were about emigration. She went to America on a coveted Green Card after coming out as gay. She says: “My father was worried about my safety here, and look at Ireland now.”

Life was full of distractions and she admits to almost losing touch with squash. She worked for a short while with Pinkerton Investigations in Las Vegas, yes those famed detective Pinkertons.

But she found herself coaching after a chance meeting with a coach who spotted her idly hitting a ball on an empty squash court.

That led to coaching collegiate teams at Cornell and MIT and working with disadvantaged kids on Urban Squash programmes. She even competed briefly in the American Masters, winning three national titles in her 30s, but coaching was her future or so she thought.

She returned to Dublin with her American wife Debbie, and was focused only on coaching. Until the stroke changed it all again.

Looking back at when she was ill, O’ Doherty says bluntly: “I hadn’t been playing for about three years. I was somewhat overweight, I felt I was 46, I was miserable and wondering was anything better going to happen to me.”

Instead she’s balancing coaching with a new career, one that could run for another 30 years. And O’ Doherty is making sure she’s not the only older woman rediscovering her love of squash.

“The Masters scene is really starting to blossom, especially for women. It has been there all along for the men. It’s permitted now to do sport as an older woman, it’s not frowned upon, it’s really powerful,” she says.

She set up an informal group called Women Who Squash. About 20 women over 35 turning up for training and determined to get back on the courts. Some competed in the Leinster Open in December and are hoping for places on the Irish Masters team too.

O’Doherty said: “It’s amazing, collectively we have been inspiring each other.” So far, she is the most successful of the group, but she predicts changes to that.

She also predicts continued change in the fashion stakes as squash follows tennis in moving away from all-whites. O’ Doherty is known for her gold jacket and colourful socks, as much part of her routine as writing goals in her journal before every match.

Like her old coach Alan Jerrold told her, it’s good to smile sometimes.

She says: “It’s great to win, of course it is. But I’m not always going to win everything. I would think now I would still continue to play because I love it so much now. That’s very profound, isn’t it?”