Mary Hannigan: If the hope doesn’t kill us, it’ll get us through to 2021

View from the Couch: Croke Park rocked to Aslan’s Crazy World, which was appropriate 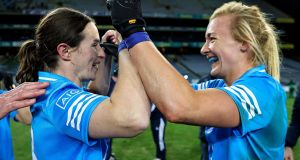 Máire O’Shaughnessy’s thank-you list was so lengthy during her victory speech after Meath beat Westmeath in Sunday’s All-Ireland Intermediate final, her team-mates began to chuckle, like they were listening to the audiobook of War and Peace. “It takes an army,” she reminded them, laughing as she continued.

Joanne Cantwell saluted those armies too when she bid adieu from Croke Park on Saturday night, thanking “the match officials, the medical staffs, stewards, bus drivers, county board members, security people, production staff, groundkeepers, Covid officers the length and breadth of the country... and most of all the management teams and players who had to take risks which no sportsperson should ever have to take.”

And they all deserved that acknowledgement too because if it wasn’t for them, we wouldn’t have had the chance to conclude 2020 with a rare enough taste of normality, ie knocking lumps out of each other over whether the unrelenting success of Dublin’s men and women should be applauded or greeted with a heated national debate. The old normal, like.

Speaking of normal things. Stephen Cluxton and Sinéad Aherne’s seasons usually end with three things: an All-Ireland winner’s medal, the raising of a Championship trophy, and a question about whether they’ll be back next year.

“God knows, we’ll see,” Cluxton said to Cantwell, although the national consensus was that if he was giving an interview, him not being mad fond of shooting the breeze with the media, then maybe this was his swansong. God knows, we’ll see.

Why did he go straight to the dressing room after lifting the trophy, rather than join his team-mates’ celebrations on the pitch?

“We’ve spoken about the hurt of the years I didn’t win, I wouldn’t like to be on the receiving end of people shouting and jeering in my face, I just think it’s a nice gesture to quietly go in and celebrate out of harm’s way. I know the guys in the Mayo jerseys put so much time and effort in to that, the hurt that they’re feeling, I know what it feels like. It’s just an appreciation for the contest.”

TG4’s Zoomy Fan Wall went wild, the Dub families dancing around their livingrooms, the Cork crew slumped on their sofas

And then Aherne’s victory speech. “Never have we been so privileged to pull on the blue jersey, to raise our game, our spirits and our town. You’ve represented your families, your clubs and our city, but more than that, each other – with such beating blue hearts.”

Now, okay, maybe these slices of eloquence and loveliness didn’t leave 31 counties saying, “God, I’m glad the Dubs won,” but if you weren’t even tempted to doff your cap, then your heart is made of granite.

Cluxton made his championship debut in 2001 and had to wait 10 years before his first All-Ireland triumph, two months short of his 30th birthday. Aherne first played for Dublin in 2003 and lost five of her first six All-Ireland finals. Between them, they’ve suffered as much heartache as the entire county of Mayo. But between them, they now have 13 All-Ireland winner’s medals.

Come full-time on Sunday, Croke Park rocked to the strains of Aslan’s Crazy World, which was wholly appropriate after the year that’s been in it.

TG4’s Zoomy Fan Wall went wild, the Dub families dancing around their livingrooms, the Cork crew slumped on their sofas, the most 2020-ish image that could ever be mustered as the victors stood in the middle of Croke Park, the stands empty, the trophy remaining on its plinth. And nobody quite sure how they could celebrate.

The hope might kill us, but still, here’s hoping to a more normal 2021.