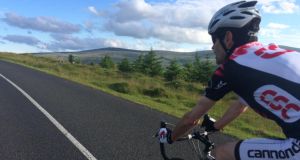 Much of the Wicklow Military Road naturally opens itself to one-way traffic. Photograph: Ian O’Riordan

I dreamed we saw Dave Stohler last night, riding just ahead of us in the one-way cycle lane that begins on the first gentle ascent up towards Killakee and then slowly stretches out along the 58km roof of the Wicklow Mountains, from the Sally Gap to Laragh and down as far as the last of the old barracks at Aghavannagh.

The sun was hot and melting the tar on the side of road, and there was little noise or hurry, only that steady rush of pleasure and adrenaline which comes with each swerving incision straight through the heart of the Wicklow Mountains National Park, some 20,483 hectares in all, the largest of Ireland’s six National Parks, and still perfectly serviced by the Wicklow Military Road. All of which, naturally, lies on the doorstep of our own capital city.

In weather like this it can be the dream road to cycle, and literally so when no one has actually rode over it since the end of March, strictly not anyway, and when watching Breaking Away on almost continuous loop is clearly no substitute. Come the June Bank Holiday, between the sweet blooming ferns and magnificent foxglove, it could often feel like our own little slice of The Stelvio Pass – as long you didn’t get a bloody puncture.

Built between 1801 and 1809, in the immediate aftermath of the 1798 rebellion, the original purpose of the Wicklow Military Road was twofold: to enable the British troops to quickly infiltrate the remote highlands; and to restrict the ability of the Wicklow rebels to move unseen. At first, any non-military personnel who wanted to travel the route had to obtain a permit of transit from the Barrack Master in Dublin, and after 200 years now might be the perfect time to restrict access in another way.

Not everyone will want to make some or all of the 58km route part of their daily exercise once Covid-19 restrictions are further lifted, but there’s a good chance the Wicklow Military Road will be flooded with cyclists again, and I know that because I’ll be riding somewhere between them, probably still dreaming of a beer garden and occasionally dropping in an aria from Il barbiere di Siviglia.

As if any hints were needed, the Sport Ireland survey this week on adult sport and exercise during the pandemic has now put cycling alongside running and walking as the new people’s game. Conducted in five phases between February and May, the numbers out cycling at least once a week rose to 510,000, effectively twice as many as this time last year, and not far behind the 680,000 runners. Just wait until that 5km radius is gone.

This is like one of those surveys which reveal four out of five men like a cold beer after a long cycle. What’s up with the other guy? It’s telling nonetheless. The numbers now out walking are even more impressive, the survey revealing a cumulative rise of 18 per cent over the five phases of research, to 83 per cent of those polled – the equivalent of around 3.1 million regular walkers.

Some of us will always prefer to walk towards the pain and suffering of the 5,000m race, but there’s no denying the many benefits of a simple walk – better still in or around the mountains. To the founding fathers of walking such as John Muir, who always said the clearest way into the universe is through a forest wilderness, or Henry David Thoreau, who never found any companion who was as companionable as solitude, this always made perfect sense.

Actually Thoreau’s Walden; or, Life in the Woods, is essentially about going for one long walk – 175 years ago this summer – to “live deep and suck out all the marrow of life”. It’s also one of those books that inspired a taste of the walking-thinking philosophy in every generation that followed, from Leo Tolstoy to Christopher McCandless and our own wandering John Moriarty, or anyone else keen to avoid a life of quiet desperation.

Thomas De Quincey once calculated that William Wordsworth – poet laureate of long mountainous strolls – must have walked some 180,000 miles in his lifetime, and look at all the good it did him. Because walking doesn’t require as much conscious effort as running or cycling, the mind is usually freer to wander down the foggy ruins of time, far past the frozen leaves . . .

As if on cue, Coillte did Dublin hill walkers a nice favour this week when deciding to transform their 900 hectares across nine forests – Ticknock, Kilmashogue, Ballyedmonduff, Massy’s Wood, Hell Fire Club, Cruagh, Tibradden, Barnaslingan and Carrickgollogan – from horrible clear-fell commercial use to allow for more strictly recreational activity, while slowly replanting with native species such as Scots pine, birch, rowan, oak, holly and willow. Wait until the autumn of say 2030.

Anyway back to the bike. Whatever about those daftly exaggerated claims that some sports such as rugby may lose a generation of players if restrictions aren’t soon lifted outright, some sports such as cycling may already have found an extra generation. Not just the people hopping on their bike to work – which is also why the plans from the Department of Transport, Tourism and Sport this week to provide technical and financial support to improve walking and cycling infrastructure showed precious little imagination.

Among the measures being suggested are “potential one-way systems to create space for footpath widening”, along with some additional “temporary” facilities for cyclists. Is that it? Because if anyone in there wanted to dream up something a bit bigger they only need to look at somewhere like the Wicklow Military Road, which doesn’t pass a single dwelling from John Millington Synge’s old hideout at McGuirk’s Cottage near the top of Glencree until the last descent into Laragh, and from there a one-way cycling lane could probably be continued in parts, at least on into Aghavannagh.

This may not work on every popular cycling route around the country, even if somewhere like the Ring of Kerry is always best cycled in an anti-clockwise direction, and could be worth dreaming about too, but much of the Wicklow Military Road naturally opens itself to one-way traffic, and with that a one-way cycle lane, making it infinitely more pleasurable to every rider and motorist.

Those approaching from the Roundwood or Blessington arms of the road could either join the one-way system or ask themselves why they needed to be up there in the first place, when there are far more convenient commuter roads either side of the Wicklow Military Road. Or maybe they should just close it all off to all motorists altogether. Is that too real for you?