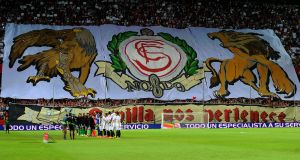 The La Liga season will resume with the derby between Sevilla and Real Betis at the Ramon Sanchez Pizjuan stadium on Thursday, June 11th. Photograph: Cristina Quicler/AFP via Getty Images

Spanish soccer’s top-flight La Liga will resume after a three-month pause due to the coronavirus pandemic on June 11th with the local derby between Sevilla and Real Betis, the government’s department for sport (CSD) said in a statement on Friday.

“At a meeting of the contact group they form alongside the CSD, the Spanish soccer federation (RFEF) and La Liga have agreed to the format of the final 11 rounds of fixtures of La Liga and the second division,” said the statement.

“The competition will restart on the weekend of June 13 and 14, with the first match being Sevilla’s game with Real Betis on Thursday June 11.

“The last round of matches will take place, provisionally and depending on the evolution of the virus, on the weekend of July 18 and 19.”

The CSD also said the RFEF and La Liga had pledged to work together to set fixtures for the remainder of the season, despite the two organising bodies clashing in the past, including in court, over the scheduling of matches.

“Given the circumstances, the CSD would like to congratulate the members of the group for their spirit of dialogue and the good will they showed during the meeting at the department’s headquarters,” added the statement.

1 Game Changers: Gary O’Toole took a stand when others turned their heads
2 Gerry Thornley: Munster will make for interesting case study when rugby resumes
3 Georgia and Fiji in line to join Six Nations sides in eight-team tournament
4 Roger Wilson tackling the problem of bad technique in Texas high school football
5 James McClean says he gets no support for abuse he receives
Real news has value SUBSCRIBE
Crossword Get access to over 6,000 interactive crosswords