I, Tonya reveals a deeper truth than Harding’s level of guilt 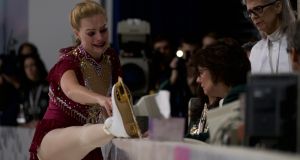 Some stories don’t need a movie, propelled as they are by enough of their own cinematic energy already. The saga of Tonya Harding and Nancy Kerrigan made them, for a couple of months in 1994, two of the most famous people in the world. It didn’t matter if you couldn’t tell a triple Salchow from a double cheeseburger, you knew that Kerrigan had had her knee busted by a guy wielding a bat and that Harding, her rival on the US Olympic team, was accused of being involved.

So when I, Tonya hit the cinemas in 2017, it was initially hard to get overly excited about it. This wasn’t some obscure little sports tale brought to a wider audience by transplanting it to the silver screen. Kerrigan and Harding made the cover of Time, Newsweek and Sports Illustrated in January 1994. In the 27 years since, only OJ Simpson and the 1999 US women’s soccer team have done that.

There had been endless coverage at the time and in the years that followed. Documentaries, TV movies, big set-piece interviews every few years, anniversaries. No list of Olympic scandals was complete without reference to it. If you were into sport and over 30, chances were you knew the story already. Or at least you knew enough of it to know you probably knew enough.

But then you sat and watched it and realised that knowing the story has virtually nothing to do with enjoying a movie, not when a movie is this compelling. I, Tonya isn’t a documentary and it doesn’t really try to tell you the story of what actually happened. Not definitively, at any rate.

Instead, it allows the people involved to tell their truth, the story as they choose to remember it. You come away not much the wiser as to the ins and out of it all, and in fact probably much less certain than you were going in. But you also come away knowing that none of that really matters. That’s not what movies are for.

The film’s origin story is quite the tale in itself. Steven Rogers had been a screenwriter in LA for the best part of two decades, and his CV boasted a few hits here and the occasional dud there. His main bailiwick was romcoms – he adapted Cecelia Ahern’s PS, I Love You in 2007 – but it was a neighbourhood in which he was growing increasingly frustrated.

One night while his niece was visiting, they were flicking around the channels when The Price of Gold came on, the 30 for 30 documentary on the Harding-Kerrigan affair. When his niece said she didn’t know anything about it – she was too young to have been around to make anything of it in 1994 – they settled in and watched.

“I just thought, this is going to be crazy for her,” Stevens told a group of film students in 2018. “So we watched it, and in it there was just stuff that interested me about class in America and about what we tell women they’re supposed to be. And the things that we tell ourselves in order to be able to live with ourselves. And I just thought, ‘There’s a lot there.’

“So I went on to the Tonya Harding website, as you do. I wanted to see if the life rights were available. I called the number for her agent and it turned out to be a Motel 6. And I just thought, ‘I’m so in. I don’t know if this is ever going to be a movie but my life is going to be so much more interesting if I do this.’ ”

Before he sat down to write a word, Rogers went to visit Harding. He did what screenwriters are never, ever supposed to do – he paid her some money out of his own pocket despite not having a studio, a producer, a director or a star attached to the project yet. You make movies with other people’s money, never your own. Especially not when you’re only a lowly screenwriter. But here, for once, it paid off.

She spent six hours answering his questions and he was off to the races. It got Rogers in the door, it got Harding to tell him the story as she saw it and it meant that when he went to meet her estranged husband Jeff Gillooly, it took less than an hour for him to realise what the movie should be.

Gillooly wouldn’t take any money – his reasoning was that he had cost Harding her career so he didn’t want to profit off it now – but if that suggested a softening of his feelings towards his ex-wife, it was the last such indication he would give. From that point on, they were at odds with each other at more or less every turn. Which immediately helped Rogers understand how to structure his film.

“I got the idea when I interviewed Tonya and Jeff,” says Rogers. “Once I interviewed both of them, their stories were so wildly contradictory. They did not remember anything the same. And I thought, Well, that’s my way in. I’ll just put everybody’s point of view up there and let the audience decide what they believe.

“What they were both trying to do was control the narrative. Everybody in the story is. And that is really what the movie is about. It’s what we tell ourselves so we can live with ourselves and get eight hours of sleep at night and make ourselves believe it. I think it was Collette who said the longer you wear fake pearls, the realer they become. I think that’s true of all the characters, but I also think that’s very, very human. I don’t think it’s particular to these people.”

What results is a rollicking tale where everybody is fighting their corner, all at the same time. Harding is presented as a white-trash underdog who never stood a chance: browbeaten by a monstrous mother, abused by a domineering husband, downgraded and degraded by sniffy judges, beaten back at every turn with only her skating talent to carry her along.

That talent got lost in the storm down the years. The reason Tonya Harding matters at all is that despite everything that went against her, she was a genuinely world-class figure skater. A pivotal point in the movie comes when she makes history as the first American woman to land a triple axel in competition, doing so at the 1991 National Championships. Putting it on a cinema screen was an Olympian feat in itself.

Though Margot Robbie trained for four months on the ice and did a lot of the skating moves herself, an ability to pull off a triple axel would make her a contender at the Olympics, never mind the Oscars. To this day, only 15 women in history have done one in competition. So it was never going to be a simple matter of coaching her up to do it.

Robbie had two body doubles, both of whom competed at national or international level for the US. Anna Malkova and Heidi Munger were highly accomplished skaters and could do all the triple jumps – except for the axel. Robbie did all the transition moves – skating on to the ice, entering a spin, coming out of a jump – and it was down to Malkova and Munger to make the actual moves look Olympic standard. Robbie’s face was then stitched on in post-production.

“We were able to achieve the triple axel by repeatedly filming the double axel, which is 2½ revolutions in the air. We must have filmed about 30 double axels, and through editing magic, we were able to achieve the extra rotation. Margot did some special shots for the face-replacement special effects. She stood in front of a green screen and she had to do at least 2,500 different positions with her head and her torso to make it work.”

In the end, I, Tonya leaves you thinking at least a little better of its central figure. Maybe she ordered the hit on Nancy Kerrigan, maybe she had nothing to do with it. Maybe she was in the room when the idea was said out loud and she didn’t kill it off immediately like she should have. You are invited to make up your own mind.

But more importantly, you are invited not to fixate on it. The best sports movies tell a certain truth. About sport, about people, about acceptance and triumph and loss and all that good stuff. I, Tonya is different in that it tells a whole load of different truths, each of them a different shade of reality, most of them at odds with each other.

It all adds up to a reminder that life is messy and contradictory and that everyone’s story is their own. And above all, that nobody sticks the landing every time.