Joanne O’Riordan: NFL leaves victims and survivors out in the cold

Super Bowl involved players who have turned women into victims 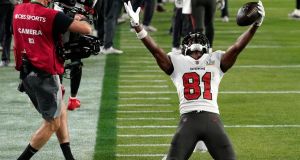 Like so many people around the world, I stayed up bleary-eyed, delirious, tired and excited as I watched Tom Brady and the Tampa Bay Buccaneers dethrone Patrick Mahomes and the Kansas City Chiefs in the Super Bowl. As one of many fans who tuned in, I found myself watching with a sense of discomfort I couldn’t put my finger on.

This Super Bowl was one that had a bunch of firsts. In 1997, Amy Trask of the Oakland Raiders became the first woman to become chief executive of an NFL team. At that time she said, “What is really going to excite me is when this is no longer aberrational or when this is no longer something that’s noteworthy.” Firsts are always a talking point and a headline.

Coaching in the NFL took a bit longer to catch up. It was only in 2015 that a woman became involved with the coaching staff, the Arizona Cardinals hiring Jennifer Welter as an assistant coaching intern for their training camp and 2015 preseason. She had a doctorate in psychology and worked with the team’s linebackers and under head coach Bruce Arians, who is Super Bowl-winning head coach with, you guessed it, the Brady-led Tampa Bay Buccaneers.

On Sunday, Sarah Thomas became the first female official to officiate a Super Bowl, when she got the call up to be the down judge after serving in the NFL for five years. So overall, an excellent night for history-making, even if your name is not Tom Brady.

But, despite a historic night where women were at the forefront courtesy of the history-makers, it was also night that involved people who have turned some women into victims.

Take Super Bowl winner Antonio Brown as an example. While the NFL was firmly reflecting and attempting to learn from its past, Brown was not even remotely interested in talking about his.

Since leaving the Pittsburgh Steelers after fighting with, well, everybody, the words sexual harassment, abuse and even rape have followed Brown everywhere he has gone. “I’d be doing a disservice if I talked about things that are not a focus of this game,” he bullishly said during the Zoom press conferences.

The things that are not about the game are as follows: verbal abuse aimed at the mother of his three children which was recorded on video, an accusation of sexual harassment that was described in graphic and horrific detail in Sports Illustrated and, finally, an inevitable lawsuit accusing him of rape, a claim that he has denied.

With Brown winning another Super Bowl, the Bucs facilitated an abuser in a league that has enabled abusers throughout its history. It also ensured that they looked past and demeaned the entire #MeToo movement, making sure that women who have dared to stand up and tell their stories are now pushed into silence, absolutely forgiving the abusers who have made these women suffer in silence for far too long.

Brown isn’t the only one. As Keith Duggan wrote in the Irish Times on Saturday, you would be forgiven if Tyreek Hill’s speed, grace and sheer athletic ability left you bamboozled, bamboozled enough that you would conveniently forget his guilty plea for domestic abuse against his then pregnant girlfriend.

Again, allowing Hill into the NFL despite scouts questioning his “character” is another example of how the NFL doesn’t care as long as you continue to produce the goods on the big nights against the big teams. And sure, why would fans really care? You should only judge these guys from their talents, what happens behind closed doors stays behind closed doors.

While the NFL, the Bucs and the Chiefs were all cheered and jeered for their on-field actions, the long line of women, children and men, who are all victims, were left behind.

Sunday was an incredible night to be a woman in the NFL. It truly was the night of firsts, and that headline should stand proud as time moves on. But it’s hard to be proud when victims and survivors are once again left outside in the cold.