Cork v Clare in Pairc Ui Rinn, quick rasher sandwich, then off to Dunedin for the cricket 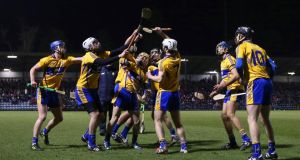 Clare players go through a warm up drill before the game against Cork. Photograph: Cathal Noonan/Inpho

Cork v Clare in Pairc Ui Rinn, a quick rasher sandwich, then off to Dunedin for Sri Lanka v Afghanistan. Where would you be going? And if it wasn’t for Patrick Horgan and Mahela Jayawardene they would have been epically close encounters too, instead Cork seeing off Clare with 10 overs to spare and Sri Lanka prevailing by 236 to 0-6.

Davy Fitzgerald wasn’t panicking though, this only being winter, and any way he reckoned Clare’s ropey start gave the Setanta pundits, Eoin Kelly and Brian Hogan, something to talk about, which it did. Still, he must envy the start Ger Cunningham is having with Dublin, Kilkenny’s National League scalp added to Tipp’s yesterday.

How difficult is coaching? A cinch, according to Man of the Match David Tracey when he spoke to TG4 after the game, “Ger’s only said one thing since he came in: ‘Just work your socks off.’”

England cricket coach Peter Moores should take note, it could be that he’s been overcomplicating things at this World Cup, hence the nightmarish start. Focus on the socks.

Before we settled down for Sri Lanka v Afghanistan, Sky linked us up with Paul Allott and Mike Atherton in Christchurch ahead of England’s encounter with Scotland last night.

(“Well, they WILL beat Scotland,” Paul chuckled – that game was past our deadline, but if Scotland triumphed, it’ll be our quote of the year).

The pair talked about disgruntled England fans, some of them making snide remarks towards the players as they boarded the flight from Wellington, and when we saw the crumbled church behind Paul and Mike we wondered if they’d taken their disgruntlement too far.

Then, of course, the guilt set in on realising it was actually damaged during the 2011 earthquake, calling to mind that moment in Rome during Italia 90 when Jimmy Greaves looked upon the Colosseum and wondered if it was a random building damaged by rioting England fans. Jimmy was kidding, although Ian St John looked a bit alarmed.

Speaking, in a seamless link kind of way, of inflicting damage: Ash ‘The Bash’ Daly and Paddy ‘The Hooligan’ Holohan.

The pair turned up on The Saturday Night Show and while some of us might not be all that up for watching them in Mixed Martial Arts’ action, you’d pay in to hear them chat.

Mind you, those of us who reckon MMM and all that UFC business is akin to a scrap outside the chippers in the early hours of a Saturday morning were put in our place by Ais.

“It’s just a combination of a lot of different Olympic sports,” she said.

“All thrown in, a nice little mix,” she said.

So that’s it really, a bunch of noble sports blended to give us the riot that is MMM.

And Paddy ‘The Hooligan’ will never forget his first taste of the art. His opponent? Ais. “He was one of these young guns, came in to the club, Jobstown head on him, thought he was a tough man, I had pink hair, quite petite, five foot two and a bit, and yeah, I beat Paddy up.”

She did too. “It was a scary ass day,” he said, “she was only small but before I knew it I was getting hit in places…ah …. I felt like I was surrounded, to be honest. I went to the car, had a life moment on my own, I might have shed a little tear or two. I went home, I recovered, had a cup of tea, had me porridge and I went back.”

You couldn’t but love ‘em. Especially when you hear of the misery they endure to succeed in their chosen sporting profession. Dessert for Paddy? “I dip my finger in the jam and the peanut butter and the Cocoa flakes,” he said, and that’s it.

Back in December, Ais won a contest that should have earned her a $50,000 bonus from the UFC. But she was two – two! – pounds overweight, so the bonus was withheld and she was fined 30 per cent of her purse, which was given to her opponent.

As for a social life. Huh. “You don’t really have friends any more, you just have team mates,” she said, noting how pals have stopped sending her invites to special occasions because she’s never able to turn up. “And we’re Irish, everything is centred around either eating or drinking, so if you can’t eat or drink what are you going to do?”

Work your socks off?