Woods hints he would back professionals and amateurs using different equipment 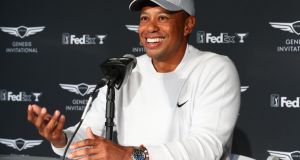 Tiger Woods has hinted he would be in favour of a possible “bifurcation” of the rules of golf which would see professionals and amateurs using different equipment.

Advances in fitness and golf equipment technology have seen players hit the ball further and further in recent years, leading to courses being lengthened in an effort to continue to test the world’s best.

Golf’s governing bodies announced last week that they intend to break the “ever-increasing cycle of hitting distance”, but admit it could take years before solutions are found.

The USGA and R&A will assess the potential of a “local rule” which would allow tournament committees to “specify use of clubs and/or balls intended to result in shorter hitting distances”.

They have also pledged to review their current specifications for equipment to see if they require “tightening or adjusting”, but such potential changes would be aimed at top-level professionals and amateurs rather than recreational players.

Woods, who has previously expressed support for limiting the distance the ball can travel, told a pre-tournament press conference ahead of the Genesis Invitational: “I’ve always said that the game of golf is fluid, it’s moving, and the golf ball is certainly going a lot further than the balata days.

“We’ve come a long way and what’s been crazy is that I’ve been a part of all that. When I first started on tour I beat Davis Love in a playoff [in 1996] and he was using a persimmon driver. If you could carry it 270 [yards] you took a lot of trouble out of play. Now guys are hitting hybrids and five woods 270 in the air.

“The game has evolved and changed and we’re running out of property trying to design courses that are 7,800 to 8,000 yards. It’s difficult but on top of that we want to keep the game so enjoyable. We’re trying to get more participation and having the larger heads, more forgiving clubs, it adds to the enjoyment of the game, so there’s a very delicate balancing act.”

Woods admitted that players have also become physically stronger since the days when only he and Vijay Singh would be found in the gym at tournaments.

However, he also acknowledged that if top players were required to use different equipment from recreational players it would affect “only 1 per cent of the guys or women”.

“Part of the discussion going forward is do we bifurcate or not, and that’s probably going to be well after my playing days that we figure that out,” Woods added.

Woods also suggested that he is unlikely to captain the United States’ Presidents Cup team again in 2021, admitting he was “struggling with the same issues” which led to opposite number Ernie Els ruling out repeating the role.

Tournament host Woods is seeking a record 83rd PGA Tour title at Riviera, a course where he has yet to taste victory in his career.