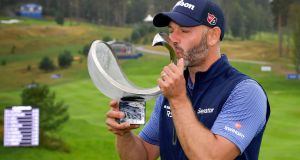 England’s Paul Waring admitted he doubted whether he would ever win on the European Tour after finally doing so at the 200th attempt with a nerve-racking victory in the Nordea Masters.

Waring held a two-shot lead with four holes to play and was still one ahead playing the last, only for playing partner Thomas Aiken to make birdie and force extra holes.

However, Aiken then drove into the water when the players returned to the 18th for a sudden-death play-off, and Waring’s par was good enough to secure the victory and first prize of £225,000.

The pair began the day tied for the lead, and matching rounds of 68 saw them finish level on 14 under par at Hills Golf Club, a shot ahead of Germany’s Max Kieffer.

Kieffer covered the back nine in 29 in a brilliant final round of 65, with Thorbjorn Olesen’s fourth place enough to see him displace Ian Poulter in the final automatic qualifying berth for next month’s Ryder Cup, with just two events remaining.

“I’m obviously ecstatic,” Waring told Sky Sports. “I wasn’t ever sure this day would come, in total honesty. I’ve tried so hard for many years to get to this point and it’s nice to finally get across the line and be holding the trophy.

“It wasn’t easy. I felt really in control, though. I’ve made a few swing changes so I was kind of allowing myself to hit some bad shots now and again, so I wasn’t getting too wound up in where the ball was going.”

Waring won the English Amateur title in 2005, but has been hampered by numerous injuries during his professional career, and last year’s 60th place on the Race to Dubai was his best season to date.

“It feels like it’s all worth it,” the 33-year-old from Birkenhead added. “I’ve had a couple of operations along the way and it’s nice to have finally got to this point and I’m sure everyone back home will be absolutely thrilled for me.

“I’ve got a great team around me so this is all for them as well.”

Aiken had made the ideal start with two birdies in the first three holes, but the South African then dropped shots at the fourth and fifth, and birdies on the second, 10th and 13th gave Waring a two-shot lead.

Waring’s bogey on the 15th gave Aiken renewed hope and he got up and down from a greenside bunker on the 72nd hole to force extra holes, only to make a mess of the play-off hole and miss out on a fourth European Tour title.

Four Leinster players nominated for European Player of the Year award 10:37
Chelsea have a free hit from here but may not get a better shot at it 08:49
Liverpool eyeing another comeback; Outline plan for return of club rugby 07:35
Seán Moran: DRA saving the GAA a lot of money for 16 years 06:00
Sarah Lavin bidding to clear last hurdle on the way to her Olympic dream 06:00
Here is your handy guide to sport on television this week