Race leader Patrick Reed cards 70 in his first round 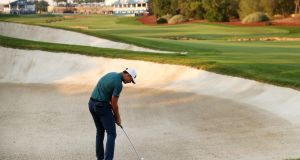 France’s Victor Perez plays his second shot on the 18th hole during the first round of the DP World Tour Championship at Jumeirah Golf Estates in Dubai. Photograph: Francois Nel/Getty Images

France’s Victor Perez jumped into pole position to win the Race to Dubai after day one of the €6.6 million DP World Tour Championship.

Victory in the season-ending event in Dubai would make Perez the first French player to become European number one, as long as current leader Patrick Reed does not finish outright second.

Former Masters champion Reed, who is hoping to become the first American to top the money list on this side of the Atlantic, carded 16 pars and two birdies in an opening 70, while playing partner and 2017 Race to Dubai winner Tommy Fleetwood returned a 69.

“In the position I’m in, I have nothing to lose. I have everything to gain,” Perez said. “So for me it’s really a going-for-it mentality that I have to keep for four rounds.

“Obviously you still have to play proper golf and hit the right shots and sometimes take your medicine, but again, I have really nothing to lose and it’s a matter of making a lot of birdies.”

Reed began the week with a 460-point lead over Fleetwood in the standings, but with 2,000 points on offer to the winner it is mathematically possible for 61 of the 65-man field to finish top of the money list and claim the Harry Vardon Trophy.

MacIntyre secured the rookie of the year title in the same event last year, a tie for 14th leaving the left-hander 11th on the Race to Dubai, three places ahead of nearest rival Kurt Kitayama.

“It would mean everything to win the Race to Dubai, not just to me but to the whole team,” the 24-year-old said. “But again, it’s a long, long way away. Just got to keep doing what we’re doing.

“When I put in the graft and put in the practice, my golf is good. Obviously as everyone knows, I wasn’t practising as hard [earlier in the year]. I wasn’t enjoying it as much. But I’ve got the bug back. I’ve got the right people around me and I’m just pushing on and see where we end up on Sunday.”

Fitzpatrick won the DP World Tour Championship in 2016 to eclipse Nick Faldo’s record as the youngest Englishman to win three times on the European Tour, but finished only sixth on the money list behind British Open champion Henrik Stenson.

“It’s very strange that so many players can win the Race to Dubai,” Fitzpatrick said after carding four birdies in his last nine holes. “This field is obviously used to a few more players, as well, that obviously aren’t here for various reasons this week.

“But to be able to have a chance to win the Race to Dubai despite everything that’s going on is amazing and absolutely I’d be delighted if I could take the opportunity that I have.

“I was told it was a course for bombers before I ever came here and I’ve sort of played really well here. For me the greens are just always fantastic and I love putting on greens that are this fast.

“The slopes, how fast they are downgrain, I much prefer putting on those; just sort of set it on its way and you know it’s not going to miss basically.”

Lee Westwood, who managed just nine holes in practice due to a back injury, is three shots off the pace after an opening 70.

Graeme McDowell opened with a one-over 73, the Northern Ireland golfer carding a solitary birdie on the 11th hole and two bogeys in his round.

4 TV View: No need to feel sorry for England, but if it was any other team