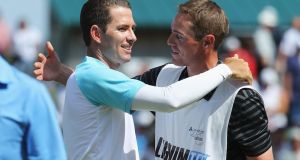 Dylan Frittelli of South Africa celebrates victory with his caddie on the 18th green after the final round of the Lyoness Open at Diamond Country Club in Atzenbrugg, Austria. Photo: Warren Little/Getty Images

Six weeks after squandering a four-shot lead with seven holes to play in the China Open, South Africa’s Dylan Frittelli held his nerve to claim his first European Tour title in the Lyoness Open.

Frittelli, a former college team-mate of two-time major winner Jordan Spieth, carded a final round of 67 at Lyoness Country Club to finish 12 under par, a shot ahead of David Horsey, Jbe Kruger and Mikko Korhonen.

The 27-year-old from Johannesburg began the day two shots off the lead, but birdied three of the first four holes and picked up another shot on the ninth to move to the top of the leaderboard.

Another birdie on the 11th briefly gave Frittelli a two-shot advantage, but that turned into a one-shot deficit when he bogeyed the 14th and compatriot Kruger followed an eagle on the 12th with birdies on the 15th and 16th.

England’s Richard McEvoy also birdied the 15th and 16th to reach 12 under, only to bogey the last two holes and have to settle for fifth place, while Frittelli birdied the 16th to regain a share of top spot.

Kruger then bogeyed the 18th and after crucially saving par from over the 17th green, Frittelli produced a superb tee shot to the heart of the green on the last to set up a winning par.

“It’s amazing,” Frittelli told Sky Sports. “At the start of the week I was obviously hoping for this but I’m really elated right now and super stoked.”

Frittelli, who lost to Alexander Levy in a play-off in China and also in extra holes in the 2016 Australian PGA Championship, added: “I was just trying to get it on the green (on the last), make a par and avoid a play-off.

“My 0-2 record in play-offs is not very good so I didn’t want to have extra guys in the play-off — trying to beat them there on the 18th would have been tough.

“Five years ago I played this tournament on an invite and managed to miss my second round tee-time so I’d like to think this is a role-reversal here and culimnation of the hard work I’ve done in between those two periods.

“Hopefully this means big things for my career, get me in the Open Championship, move up in the Race to Dubai and open up some more doors further down the road.”

Chile’s Felipe Aguilar, who held a two-shot lead after each of the first three rounds, struggled to a closing 75 to fall into a five-way tie for 10th which also included defending champion Wu Ashun.