James Sugrue ready to savour every moment of Masters dream 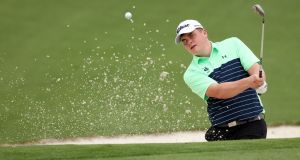 James Sugrue plays a shot from the bunker on the second hole during a practice round prior to the Masters at Augusta National Golf Club. Photograph: Jamie Squire/Getty Images

The wait was longer than anyone could have envisaged, yet James Sugrue, who slowed his car down to 8km per hour to savour every moment of the drive down Magnolia Lane, didn’t complain of the time lag: his enthusiasm to finally get to Augusta National reflected in the number of his caddie’s bib – 8 – which happens to also be where he is ranked in the amateur world rankings.

Sugrue earned his exemption to the Masters with his success in the British Amateur Championship held at Portmarnock in June of 2019, a major success that also got him to the British Open at Royal Portrush and, more recently, the US Open at Winged Foot.

So, some 17 months on from his Amateur triumph, what could prove to be his final act as an amateur has finally arrived, with a tee-time alongside two-time champion Jose Maria Olazabal and American tour player Andrew Putnam. “I knew I would play with a past champion and it’s nice to get someone like [Olazabal], it might have been intimidating if I was paired with Bryson or Rory, it would be a different ball game. I’m delighted,” said Sugrue.

Sugrue travelled Stateside with his coach Michael Collins, but without his regular caddie and friend Conor Dowling, and instead has picked up the services of local caddie Jack Fulqhum.

In acknowledging he will miss “the craic” and banter, Sugrue is aware that Fulqhum’s knowledge will prove a useful asset: “There’s some stuff I never would’ve guessed, even reading some putts . . . the greens have grain but I actually can’t see the grain. It’s weird.”

As one of six amateurs in the field – along with Americans Andy Ogletree, John Augenstein, Australian Lukas Michel, China’s Yuxin Lin and Argentina’s Abel Gallegos – Sugrue had the opportunity to spend one night in the famed Crow’s Nest, where he went to the trouble of videoing the room as a cherished memory.

What’s more, he was asked to provide the speech from the players at the amateur dinner in the clubhouse, which was hosted by John Carr, the former Irish amateur international who is a member of Augusta National.

Another one for the memory bank is that, just after teeing up to play the 10th hole in practice the other day, none other than Tiger Woods – with Fred Couples and Justin Thomas – arrived on to the tee box. “I was on the tee box by myself and the next thing they rocked up. I had my ball pegged down and they were there watching me. It was very nerve-wracking but thankfully I hit a good one down there. I took out the 3-wood, closed the face and hit a big hook around the corner,” Sugrue told the Irish Golfer podcast.

As if to reaffirm that this week he is very much part of the world stage, Sugrue was joined during his practice round by last year’s US Open champion Gary Woodland. “An absolute gent,” said Sugrue, who said the best piece of advice he had received came via former European Ryder Cup captain Paul McGinley who told him to simply enjoy the whole experience.