Tiger Woods ready to put his back in action on Sunday 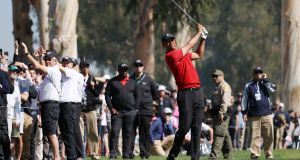 The charity golf exhibition with Rory McIlroy and friends was a nice opening act, but the sport’s headliner returns this weekend. On Sunday, Tiger Woods will play for the first time in three months, ending his longest layoff since recovering from spinal fusion surgery in 2017. Woods and Phil Mickelson will reprise their match-play showdown of 2018, this time to benefit coronavirus relief efforts and in pairings with former NFL rivals Peyton Manning and Tom Brady (available to view in Ireland on CNN [Sky channel 506] from 8pm).

The appearance will be a meaningful opportunity to assess the fitness of not just Woods’ golf game but also his back, which after four operations is an anatomical wild card. The competitive golf world’s last glimpse of Woods, 44, was in mid-February, when he was stiff and uncomfortable as he shot an ignominious 11-over par in the final two rounds of the Genesis Invitational to finish last among the golfers who made the cut.

It appeared to be a minor setback at the time. But roughly a month later, citing trouble with his cranky back, Woods withdrew from a series of high-profile March tournaments, including the Arnold Palmer Invitational, which he has won eight times, and the PGA Tour’s signature event, the Players Championship. When the PGA Tour was suspended soon afterward, with the Masters postponed the same day because of the coronavirus pandemic, Woods was idled like thousands of other pro athletes around the globe.

But Woods, unlike most of his brethren, has a shrinking window to add to his celebrated sporting legacy. He is tied with Sam Snead for the most career PGA Tour victories with 82, and his 15 Major golf championship titles are three behind the record total won by Jack Nicklaus.

It’s not just Woods’ age that will pose a challenge going forward; there are questions about how long his back can hold out. “If he were to chase the record books, it would need to occur pretty soon,” Dr Wellington Hsu, an orthopedic spine surgeon at Chicago’s Northwestern Memorial Hospital who has studied athletes after spinal fusion operations, said Friday. “It’s more likely he would have success now rather than three, four or five years down the road. At least based on medical science.”

Hsu, however, added that no professional golfer had returned to competition after the kind of fusion surgery performed on Woods. “He’s proven the experts wrong already,” Hsu said. “Some people have an incredible amount of reserve in every other part of their body, or their muscles are stronger and can support a significantly degenerated spine to perform at a high level.”

In a video conference call with reporters this month to promote Sunday’s charity event, which will team Woods and Manning against Mickelson and Brady, Woods appeared fit and said he was swinging a golf club freely again. When Mickelson teased Woods about not winning their previous nationally televised match, Woods leapt from his chair and said, “Hold on, I’m a little chilly.”

With a wide smile, he draped the green jacket he earned with his stunning win at the 2019 Masters across his shoulders and upper body like a blanket. Last month, in an interview with GolfTV, which has a business relationship with Woods, he insisted that the condition of his back had improved greatly since February, calling the difference “night and day.” “I feel a lot better than I did then,” Woods said. “I’ve been able to turn a negative into a positive and been able to train a lot and get my body to where I think it should be.” While Woods will not get to defend his Masters title until November, if then, and while there will be at least one fewer major championship this year because of the cancellation of the British Open, his recent break from tournament play may be beneficial.

“The time off is terrific,” said Hsu, who noted that Woods most likely has significant arthritis in his back. “Time off can only help his symptoms and his pain.” But if the PGA Tour resumes June 11th in Texas as planned, a compacted schedule with almost weekly tournaments would theoretically follow until almost Thanksgiving. Last season, on average, Woods took about two-and-a-half weeks off between tournament appearances. Five times he waited three or more weeks between competitions.

“I’m going to sit down with my team and figure out what is the best practice schedule, what are the tournaments that I need to play to be ready,” Woods told GolfTV. “How much should I play? How much should I rest? All the things that are kind of up in the air.

“Unfortunately for myself, I’ve been through episodes like this in my career with my back, where seconds seem like months. You have to slow things down and do things at a different pace.” The first step back is Sunday’s match at the Medalist Golf Club, Woods’ home course in Hobe Sound, Florida. “As golfers, we’ve been playing a lot – guys playing matches down here,” Woods said in the video conference call. “But it’s still not playing for trophies. It’s just different. We miss competing.”