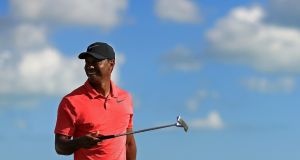 Tiger Woods says he is “very optimistic about 2018” following his successful return to the golf course earlier this month.

The American, who turns 42 on Saturday, recorded three sub-70 rounds out of four at the Hero World Challenge in the Bahamas before announcing his intention to compete regularly in 2018.

Last week Woods announced he had split from swing coach Chris Como ahead of his latest return.

In a lengthy and reflective blog on his personal website, Woods said he was “very encouraged” by his performance at the Hero World Challenge and hoped “it was the start of something big.”

Woods wrote: “I honestly wasn’t sure what to expect after being away from competitive golf for 10 months and came away excited about my health and my game.

“There wasn’t a lot of time to fully prepare for the tournament; about a month to be honest. My surgeon was fantastic in guiding me through the rehab process. It was slow and tedious, but paid off. It was a big step for me to go out there and play four pain-free competitive rounds. I practiced after two of the days, so that was nice as well. The juices were flowing right away. It was just a matter of finding the rhythm of the round.

“The biggest surprise for me was finding out that I had the lead after 27 holes. I knew I was close after I eagled the ninth. It was nice to have played well enough to do that after being gone so long. I can’t express in words how great it felt to be back in the arena and how much I missed it.

“Now, I feel I’ve taken it to another level. I’ve started practicing again and was out with Justin [Thomas]the other day and had a good time. I’m continuing to progress and trying to get strong enough to where I can handle a workload again. I would love to play a full schedule in 2018. What that entails, including back-to-back events, I don’t know. I just have to continue to work on my body and game and see where I pan out. I wish I knew where I was going to play and when I was going to play – it’s a lot easier to prep for that – but we really don’t know. This is all unchartered territory.

“My swing is definitely shorter and I can’t turn as far. My back is fused and that’s as far as it’s going to go. But I was surprised at how explosive I was. And on top of that, how well I putted. I had been rolling it well at home, but it’s totally different when you have adrenaline in your system. I’m more than a full-club longer than when I shut it down. I wasn’t hitting it very far and was struggling to hit it solid. That’s a bad combo.”

On his injuries, Woods revealed that he had a hard time walking and often needed assistance getting out of bed during his 10-month lay-off. Woods added that “one way or another” he will be at Riviera Country Club in February for the Genesis Open.

“Heading into 2018 ...” Woods signs off, “I’ve had some tough times this year with pain. To come out the other end is phenomenal.”