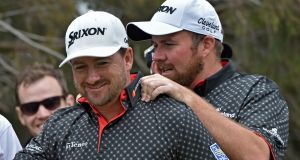 Graeme McDowell and Shane Lowry each picked up a cheque for $257,500 for their efforts at the QBE Shootout in Florida. Photograph: Paul Croke/AFP.

Shane Lowry and Graeme McDowell were thwarted in their quest to claim a pre-Christmas end-of-season jackpot when edged out by Steve Stricker and Sean O’Hair in the QBE Shootout in Naples, Florida, a two-man team competition that finished with a best ball format in the final round.

Lowry, making his debut in the competition, and McDowell, a veteran of six appearances, were the only non-American team in the 54-holes tournament hosted by Greg Norman. Although their closing round 66 for a total of 24-under-par 192 – two behind the winners – left them short of the title, there was the compensation of sharing a cheque for $515,000 ($257,500 each) for the Irish duo.

Having shared the 36-hole lead, and moving ahead with an opening hole birdie, it proved to be a frustrating homeward run for the Lowry-McDowell partnership. Time and time again, birdie putts refused to drop with McDowell failing to hole birdie chances on the 13th and 14th before finally getting some reward for his efforts with a six-footer on the 15th.

“It’s got to be right edge,” whispered McDowell to Lowry, who concurred with the assessment. McDowell sank the putt, to get one back of Stricker and O’Hair.

But that was as good as it got in their bid to reel the American duo back in, with the defining moment coming on the par five 17th where Lowry’s approach finished up against the face of a bunker and McDowell’s approach found the same trap.

In contrast, O’Hair hit a superb six-iron approach from 187 yards to six feet. He holed the eagle putt, which gave them a three-shot cushion playing the last where McDowell’s closing birdie closed the margin to two. Stricker and O’Hair’s closing round 64 for 190 ensured they claimed the winners’ cheque of $820,000.

“We really gelled well together, we felt comfortable with one another. With his length the first day (scramble), getting some clubs into the greens, some short irons for me, we just fed off that first day quite a bit,” said Stricker, whose ability to find fairways and his polished putting meaning that O’Hair could take a more aggressive gameplan onto the course in the tournament, an unofficial event sanctioned by the PGA Tour.

Stricker, a 12-times winner on the PGA Tour during his career, most recently at the 2012 Tournament of Champions in Hawaii, has played a limited schedule of late. The 50-year-old has split his time on the PGA Tour and the Champions Tour and captained the USA to Presidents Cup success in October.

As it turned out, both players contributed with Stricker claiming birdies on the seventh, ninth and 14th and O’Hair securing birdies on the eighth (from 18 feet), 11th (from six feet) and that superb eagle on the 17th to edge out the Irishmen. It was a first professional win in six years for O’Hair, dating back to his 2011 Canadian Open title.

Lowry – who finished runner-up in the DP World Tour Championship, the finale to the European Tour season last month – and McDowell finished alone in second place, with Pat Perez and Brian Harman two shots further adrift in third. Lexi Thompson, the only woman in the field, partnered Tony Finau to finish tied-fourth.

For Lowry, it was a decent finish to the season ahead of a move to the Naples area in early-January as he concentrates on the PGA Tour for the first half of next year.

“My exemption (on the PGA Tour) is up next year, so I’ve really got to go and keep my card now and try and do as well as I can. The last two years I’ve been travelling back and forth and I’ve played 15 events both years maybe, maybe 16 one year. I find most guys out here play 25, 30 events, and to try to compete against those guys in 15 events, I don’t think it’s doable.