The Ryder Cup: as friendly and cordial as a cruise missile 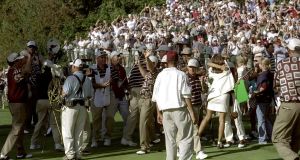 The 1999 Ryder Cup ended in controversy when the USA team, their wives and an NBC cameraman ran onto the 17th green after Justin Leonard of the US holed out even though Jose Maria Olazabel still had a putt to halve the hole. Photograph: Getty Images

“I look upon the Royal and Ancient game as being a powerful force that influences the best things in humanity. I trust that the effect of this match will be to influence a cordial, friendly and peaceful feeling throughout the whole civilised world.”

Samuel Ryder, in a radio message broadcast before the 1931 matches at Scioto, Ohio.

Yeah, good luck with that, Sammy. If the Ryder Cup has taught us nothing else, at least we know that the only thing funnier than golf’s blind sense of self-importance is the extent to which people remain people, in all their glorious baseness. Truth is, the Ryder Cup has influenced a cordial, friendly and peaceful feeling in much the same way as the cruise missile has.

Even as Sam Ryder was beseeching the whole civilised world to use the matches as a kind of North Star for human relations, the players involved were sizing each other up from opposite ends of the locker room. “We wanted to beat the British in the worst way,” said Gene Sarazen of that 1931 Ryder Cup. “They looked upon us Americans as no more than a bunch of caddies.”

We tend to think of Ryder Cup beefing as a modern phenomenon when really it’s anything but. In 1935, US captain Walter Hagen delighted in winding up his opposite number John Henry Taylor to the hilt, twice going missing deliberately on Taylor when the captains were supposed to be naming their line-ups for the next session. It got so heated that Taylor threatened to pull his team out altogether if Hagen stood him up again.

Friendly and peaceful? Well ,yeah, up to a point. The first Ryder Cup played after the second World War was in 1947 in Portland, Oregon, and was supposed to be a gentle reboot for the matches after a decade hiatus while the world convulsed. All fine and well up until British captain Henry Cotton insisted the Americans’ irons be checked by an independent arbiter the day before it all started, suggesting the Yanks were playing with illegal grooves.

American captain Ben Hogan’s umbrage was such that not only did he lead his side to a beat down of proportions never seen before or since as USA won 11-1 but he made sure to return the favour two years later when the matches returned to the UK. Much to his delight – and unlike in 1947 when the Americans’ clubs were found to be perfectly legal – his objection to some of the British players’ clubs bore fruit. The matches could not start on the first morning until the grooves on the British irons had been sanded down.

If that sounds like the ultimate in golf machismo/pettiness, there has been plenty more to go along with it in the decades since. Birkdale in 1969 was probably the closest the matches have come to actual on-course violence. The Saturday fourball match between Bernard Gallacher and Brian Huggett on the GB&I side and Ken Still and Dave Hill on the American side exploded when Gallacher objected to Still putting out of turn on the seventh green.

After the referee was called and the hole awarded to Gallacher and Huggett, all four players jawed their way to the eighth green, culminating in Still giving warning to Gallacher: “If you say one more word I’m going to wrap this one-iron around your head.” For years afterwards Still fumed about the incident. “Huggett is a hell of a nice guy, but Gallacher leaves a lot to be desired,” he said.

The Ryder Cup does this. It magnifies the smallest slights and turns them into bloody battlefields. Ray Floyd was the American captain in 1989, and as a tip of the hat to Ryder Cup history he aped Hogan by introducing his team at the opening ceremony as “the 12 best golfers in the world”.

The Europeans were suitably outraged – not alone had they beaten the Americans in the previous two matches, at the time Seve Ballesteros and Nick Faldo were ranked two and three in the world respectively. “We all told Tony [Jacklin, then European captain] to introduce Seve as the 13th best player in the world,” said Faldo.

There would be variations on that theme, of course. Ahead of the 1999 matches, Jeff Maggert brushed off the suggestion that his captain Ben Crenshaw might have a tough job finding the right pairings for the fourballs and foursomes. “Let’s face it,” Maggert said, “we’ve got the 12 best players in the world and if they just go out and play golf and hit golf shots, it’s hard to mess up putting two guys together.”

And if that wasn’t quite enough, teammate Payne Stewart ramped it up a little more by declaring: “On paper, they should be caddying for us.”

That, of course, was the Ryder Cup that ended with the American team, their wives and the NBC cameraman running on the 17th green after Justin Leonard holed out even though Jose Maria Olazabel still had a putt to halve the hole. It gave rise to one of the all-time great hissy-fit jibes in the history of the sport from European vice-captain Sam Torrance. “And Tom Lehman calls himself a man of God,” he spat when asked for his reaction. “For a so-called man of God, I thought Tom Lehman’s behaviour today was disgusting.”

Brookline threw up no end of magnificent grouching on all sides. Even after Lehman apologised, European captain Mark James refused to let it go. “You can’t just pretend that nothing has happened and what we saw in the green at Brookline was very sad,” he said a few weeks later.

James was particularly sour about the Boston crowds – understandably so as his wife had been spat at while following the matches.

That said, the Americans have always had limited enough sympathy for European players griping about the paying guests outside the ropes. “If there’s ever been anything about the Europeans that irritated me,” said Lanny Wadkins after Brookline, “it’s that they come over here and whether they win or lose, they always find something wrong with the galleries.”

Not that it’s a one-way thing. Nor anything new, for that matter. After the GB&I team won the 1957 edition at Lindrick Golf Club in Worksop, England, US player Tommy Bolt was scathing about the English crowds.

“Individually they are pretty nice folks,” Bolt said. “But get them together and they are about as miserable a bunch of people as you could ever have the misfortune to run into in a supposedly civilised world.”

Bolt’s view may or may not have been informed by the fact that he lost his two matches 7&5 and 4&3.

Of course, when it comes to Ryder Cup slanging matches pretty much everything else pales into insignificance compared to the various wars waged against each other by Ballesteros and Paul Azinger. They spanned a couple of Ryder Cups, notably 1989 and 1991, and were strictly heavyweight encounters.

Seve famously called the American team “eleven nice guys and Paul Azinger”. The American’s response was: “The king of gamesmanship doesn’t like me? Good. A feather in my cap.”

Gamesmanship didn’t cover the half of it – on either side. Ballesteros questioned the location of an Azinger drop in 1989, and two years later accused him and Chip Beck of changing their ball repeatedly mid-round.

“Azinger didn’t cheat but he lied,” the Spaniard said. “He said it happened once, but we know it happened three times. At first he denied it completely, then when he realised they could not lose the hole he changed his statement.”

Azinger’s comeback was to accuse Seve of coughing during his back swing.

That was the level back then. Juvenile, bitchy, glorious.