Tiger Woods in a share of the lead at Tour Championship 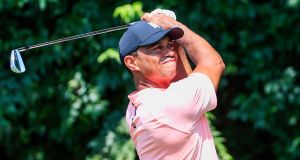 Tiger Woods in action during the Tour Championship in Atlanta, Georgia. Photograph: PA

The Ryder Cup marketing boost money cannot buy relates to Tiger Woods’s return to the competition falling immediately after a first victory in five years. The prospect is a live one after the rejuvenated Woods shot a five-under 65 for a share of the lead on the opening day of the Tour Championship.

The best was reserved until last; Woods converted from 28 feet for an eagle, with a punch of the air and crowd eruption just like old times. Over his past 16 competitive rounds Woods has a hugely impressive scoring average of 67.5. The USA clearly want him to maintain such form next weekend in France. Woods himself, meanwhile, is anxious to take delivery of a trophy.

“It would just enhance the year,” said the former No 1 of potential victory. “To be able to play golf again and to earn my way back to this level is something that I was hoping I would do at the beginning of the year but I didn’t know. And I’ve done it. I hit so many quality shots all day, whether it was tee to green or it was putts. I didn’t really mis-hit a single shot.”

Woods had opened his round with a three-putt bogey. An inward nine of 31 more than repaired that damage. As notable as the 14-times major winner’s general play was the fact a hectic schedule, including qualification for this 30-man end-of-season PGA Tour event, does not appear to have had any physical impact on Woods at all. For so long fitness problems disrupted an epic career.

Woods’s total places him alongside Rickie Fowler at the summit of the leaderboard. Both players have eyes on the aggregate, $10m FedEx Cup prize which could be the consequence of victory. Fowler had been suffering from a rib injury, which rest since the US PGA Championship appears to have cured.

“It’s not easy playing with really any kind of injury that is around the golf swing,” he said. “It’s nice to be back swinging pain-free because I wouldn’t have wanted to deal with how it felt the PGA week for a continued amount of time.

“The biggest win for Tiger is just staying healthy and being out here all year consistently” he added. “I’m definitely happy for him. It’s obviously great for our sport. It’s great to have him as part of the team next week [TOO]. We hope he continues to play well; I just want to play a little bit better and beat him.”

Rory McIlroy held the lead, at four-under par, for a spell. The Northern Irishman was jolted by a double-bogey at the 12th. McIlroy’s 67 included seven birdies, proof he is a serious threat if errors are minimised. “I played well,” he said. “Unfortunately, I just didn’t keep it going but if I keep swinging and hitting the ball like that and giving myself chances, I should be right up there at the end of the week.”

Tommy Fleetwood, playing alongside Woods, signed for a 69. Paul Casey and Jon Rahm produced 68s while Justin Rose, the world’s new No 1, came in with a four-under 66.