Stephanie Meadow in the mix for the weekend in Australia 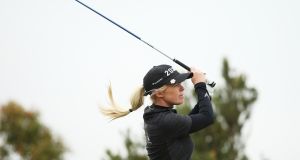 Stephanie Meadow did what she had to do, and has done so far this season, in making the cut in the ISPS Handa Australian Women’s Open at Royal Adelaide. The 28-year-old Northern Irishwoman shot a second round 72 for a midway total of 142 to make it into the weekend in tied-24th, as seven-times Major champion Inbee Park moved into a share of the lead with England’s Jodi Ewart Shadoff.

Unfortunately for Leona Maguire, her rollercoaster second round - featuring a double-bogey, three bogeys and three birdies - of 75 for 149 meant that the Co Cavan golfer missed the cut by three strokes.

Meadow made it three-from-three in again making it into the final two rounds. Following on a tied-35th finish in the Gainbridge Championship and a tied-20th in the Vic Open last week, Meadow’s round of three birdies and two bogeys saw her reach the midpoint six shots behind the joint-leaders.

Park shot a 69 for 10-under-par 136 to join Ewart Shadoff, still chasing a first career win on the LPGA Tour, on that mark with American Jillian Hollis a shot further back in third.