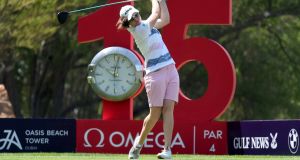 Leona Maguire, cast in the role of pursuer, flirted with a breakthrough victory on the Ladies European Tour when sharing the lead coming down the homeward stretch in the final round of the Omega Dubai Moonlight Challenge only to ultimately settle for a share of fifth place, behind Spain’s in-form Nuria Iturrios.

Iturrios, who carried the momentum from her win in Morocco last week to make it back-to-back successes and increase her lead atop the LET moneylist, closed with a 71 for a 54-holes winning total of 206, 10-under-par.

For Maguire, her final round charge – which featured four birdies in her opening 11 holes – brought her into contention. The 24-year-old Cavan golfer actually shared the lead with Iturrios, having made up a four-shot deficit, but she hit some speedbumps coming in with bogeys at the 12th and 18th which saw Maguire sign for a final round 70 for 209 alongside Solheim Cup player Caroline Hedwall of Sweden.

In earning €8,529 for her tied-fifth place, Maguire – who secured her playing rights by finishing inside the top-five at qualifying school last December – moved from 50th up to 23rd on the updated LET order of merit. The top 50 players at the end of the season earn full category tour cards for the 2020 season.

Maguire’s upward move on the order of merit from just four outings is all the more impressive given she is juggling the demands of playing on the LET with also playing on the Symetra Tour, which is seen as the pathway to the LPGA Tour.

Currently second on the Symetra Tour order of merit, with the top 10 players at the end of the season earning full rights to the main circuit, Maguire – winner of the Windsor Classic on that tour last month – will continue her juggling by returning to competition stateside next week for the IOA Invitational in Milton, Georgia.

Having started the day four shots adrift of Iturrios and Germany’s Esther Henseleit, Maguire made her move with birdies on the third, fifth, sixth and 11th to be four-under on her round and up to nine-under for the championship which leapfrogged her into a share of the lead with Iturrios.

However those two costly bogeys at the 12th and 18th saw Maguire slip back to ultimately finish in fifth alongside Hedwall. It represented Maguire’s best finish to date on the LET.

Iturrios, who has designs on making Europe’s Solheim Cup team later this year, became the first player since Aditi Ashok in 2016 to win back-to-back on the LET.

“It’s amazing to win again and I’m so excited,” said Iturrios who suffered a double-bogey after finding water on the seventh which, combined with Maguire’s birdie run, saw her sucked back into a battle for top honours.

However, Iturrios finished strongly with her birdie on the 14th proving crucial in securing victory.

Iturrios, who turned professional in 2015, has enjoyed a standout season so far with one runner-up place and two wins in her three outings on the LET ensuring she moves to number one spot on the order of merit.

Lisa Maguire completed her championship with a final round 76 for 227 to finish in tied-50th (€1,300) and moves on to compete in US Open international qualifying at the Buckinghamshire in England next week.