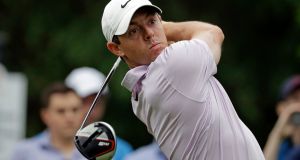 Rory McIlroy watches his tee shot on the 11th hole during the second round of the Wells Fargo Championship in Charlotte, North Carolina on Friday. Photograph: AP

In the blink of an eye, Rory McIlroy went from favoured son to one thwarted by a course which has bestowed so much on him: the Northern Irishman, on the eve of his 30th birthday, was cruising for much of his second round of the Wells Fargo Championship at Quail Hollow - a title he has won twice in his career - before a late, late dose of reality brought him back to earth.

McIlroy double-bogeyed the eighth, his penultimate hole, and then bogeyed the ninth, his finishing hole, to drop from a share of the lead. A second round 70 for a midway total of six-under-par 136 saw him slip into the chasing posse as former US PGA champion Jason Dufner assumed the clubhouse lead on 11-under.

“You know, I turned a 66 into a 70,” admitted McIlroy of his late slip-ups, compounded by failing to make a couple of other par and birdie putts. “It’s a funny game and these things happen.”

McIlroy - a winner in both 2010 and 2015, on a course where he has enjoyed tremendous success and feels very comfortable - still has the opportunity heading into a weekend when, as he has done for much of the past decade, also have the distraction of celebrating a birthday.

There was a huge difference between McIlroy’s play of the opening tow days: on Thursday, he struggled with his driving until very late in his round but his putter was red hot; on Friday, his driving was excellent -finding 10 of 14 - but his putter went cold, requiring 31 putts compared to 25 in the first round.

McIlroy had opened with a birdie on the 10th, his first hole, before dropping a shot on the 14th where, after almost driving the green on the Par 4 hole, he pitched to 15 feet and then three-putted. But further birdies on the 15th (from four feet) and 16th (from 12 inches) gave him momentum and he claimed sole leadership on the course with birdies on the third and seventh.

However, McIlroy stumbled coming in with that double-bogey on the Par 4 eighth when his drive leaked into a bunker and, over ambitious with the recovery effort, moved it only 25 yards into rough. One shot after another eventually led to him signing for a double-bogey six which was compounded when he also bogeyed his finishing hole after driving into the rough.

Séamus Power, coming in off top-10 finishes in his last two PGA Tour outings in the Heritage and Zurich Classics, continued his good form: the Waterford man reeled off birdies at the 10th, 15th and first before dropping a shot at the second, when he missed the green with his approach, then grabbed a birdies on the fourth and seventh only to bogey his closing hole, after a drive into the trees.

Power signed for a second round 68 for 137, to be inside the top-10 heading into the weekend.

Dufner’s second round 63 was literally a bolt from the blue. The American is without a top-10 finish since the 2018 Players championship and has slumped to 230th in the world rankings. But he brought back some of his old magic to move to the top of the leaderboard.