Leona Maguire finishes in a share of fifth in Dubai

Maguire, playing on a sponsor’s invitation, had a share of the lead on the 11th hole 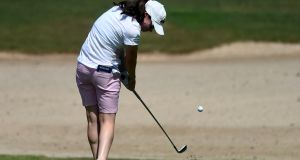 Leona Maguire embraced the role of pursuer in her quest to win the Omega Dubai Moonlight Classic on the Ladies European Tour but, after forcing her way into a share of the lead facing into the homeward stretch, the 24-year-old Cavan golfer ultimately was forced to settle for a share of fifth place.

Maguire - juggling tour cards this season on both the LET and also on the Symetra Tour, the development tour in the USA - signed for a final round 70 for a 54-hole total of 209, which left her three shots behind winner Nuria Iturrios of Spain.

Iturrios made it back-to-back wins on tour, following her success last Sunday in Morocco, and cemented her position atop the LET order of merit as she eyes a place on Europe’s Solheim Cup team later this year

Maguire, playing on a sponsor’s invitation, moved into a share of the lead with Iturrios on the 11th hole, following her fourth birdie of the round as she leapfrogged up the leaderboard.

But the former longtime world number one amateur, who turned professional last June after completing her psychology degree at Duke University and who made her professional breakthrough when winning the Windsor Open on the Symetra Tour last month, stalled coming in, suffering bogeys on the 12th and 18th holes, and had to settle for fifth behind Iturrios who closed with a final round 71 for 206.