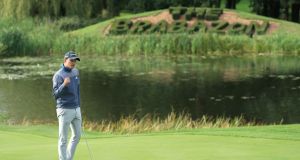 The course: Designed by American golf course architect Robert Trent Jones, Real Club Valderrama has a rich history: it was the home of the Volvo Masters which traditionally provided the conclusion to the European Tour season before the advent of the Race to Dubai, while it was the first continental course to play host to the Ryder Cup in 1987. The tight, tree-lined layout - Par 71, 7,028 yards - is renowned for its immaculate conditioning, with the risk-and-reward Par 5 17th hole, with water guarding the green, considered the signature hole in a tough closing stretch.

The field: South African Christian Bezuidenhout was a runaway winner a year ago but is not defending his title, and so the spotlight falls on Danish teenager Rasmus Hojgaard who is seeking a third win since the European Tour’s resumption. Two-time Major champion Martin Kaymer and another former world number one in Lee Westwood are also competing. Bernd Wiesberger, 30th in the world, is the top ranked player.

Betting: It’s no surprise to find Hojgaard leading the market at 12/1, however, Haotong Li has shown glimpses of form and he is worth a look at 18/1 while each-way value can be found on Pablo Larrazabal at 90/1.

On TV: Live coverage on Sky Sports Golf from 11am.

The course: Galgorm Castle - Par 70, 7104 yards - has established itself as a mainstay on the Challenge Tour and will also stage the DDF Irish Open later this month, although different tees are being used this week to protect the course. The 18th hole, normally a Par 5 for members, has been reduced to a tough, closing Par 4 for the professionals.

The field: Sweden’s Oscar Lengden missed out on lifting the Irish Challenge at Headfort last year when beaten in a playoff and has the opportunity for some redemption. He is one of a strong contingent of Scandinavians while Australian Deven Lawson and American Dodge Kemmer are likely contenders.

Tipperary consign Leitrim to relegation into Division 4 19:32
Jacob Murphy snatches a point for Newcastle at Wolves 19:14
Munster ring the changes again for Cardiff’s visit 19:12
Camogie: Rockett fires two goals as Waterford edge closer to quarter-finals 19:00
Dan Martin back to third in Vuelta after a wet and wild Stage 6 18:51
Here is your handy guide to sport on television this week