Fahy goes top of order of merit; In Numbers; Word of Mouth; In the Bag; On this Day; Know the Rules 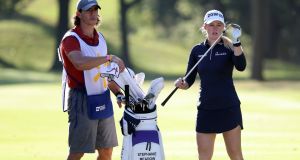 Stephanie Meadow feels her game is in good shape ahead of the ANA Inspiration Championship in California this week. Photograph: Jamie Squire/Getty Images

Stephanie Meadow would love nothing better than to jump into Poppie’s Pond, which is the traditional winning act of whoever lifts the ANA Inspiration Championship at Rancho Mirage . . . and such a soaking in the lake by the 18th green would mean only one thing: victory!

Meadow is one of three Irish players in the field for this Major championship, deferred from its original date in March, but rescheduled as part of the LPGA Tour’s big-money closing run of events to see out the season. Leona Maguire, who earned her place through a current top-20 on the money list, and amateur Olivia Mehaffey, on a sponsor’s invitation, are also playing in the championship in California, starting on Thursday.

The major controversy, however, is the failure of newly-crowned British Open champion Sofia Popov to earn either an exemption following her fairytale win at Royal Troon last month or to garner an invitation.

Meadow, in fact, has some experience of failing to benefit from performance. In the 2014 US Women’s Open, in her first event as a professional, Meadow finished third behind Michelle Wie but the money didn’t count on the order of merit.

“We have some really weird rules. I went through something similar in 2014, when none of the money counted, and I had to go back to second stage of Q-School . . . we have some rules that definitely need change but it is tough to do in the middle of the year.”

Meadow has been tipping away nicely, making cuts, since the LPGA Tour’s rebooting with a best finish of tied-20th in the LPGA Marathon Classic. “I have been trending in the right direction. I didn’t finish out great [in the British Open, finishing tied-39th] but I’m definitely seeing some positives. I’m very excited about [the ANA], I really love the golf course and I feel it suits my game,” said the 28-year-old from Jordanstown.

Now, how about that plunge into the pond?

Alan Fahy had to play second-fiddle to the in-form Peter O’Keeffe in the Munster strokeplay championship at Cork Golf Club, but still did enough to assume pole position in the GUI’s Bridgestone order of merit.

O’Keeffe followed up his win in the Mallow Scratch Cup with a runaway victory in the Munster Strokeplay Championship at Little Island, finishing seven shots clear of Fahy and Alan Ryan of Thurles.

But Fahy – who took the Carr Bruen Trophy as the leading player under 25 years of age – moved to the top of the order of merit, with just two more events left: next week’s Connacht Strokeplay and the AIG Irish Close.

Four Irish players are in the field for the Portugal Masters at Vilamoura: Paul Dunne, Cormac Sharvin, Jonny Caldwell and Gavin Moynihan.

Three Irish players are in the field for the ANA Inspiration at Rancho Mirage, California: Stephanie Meadow, Leona Maguire and Olivia Mehaffey.

Two Irish players are in the field for the Safeway Open in Napa Valley, California: Shane Lowry and Séamus Power.

“I’ve had a few people ask, was it the set up that made #ValderramaMasters so difficult? I thought it was set up as fair as possible. The 4 main reasons for high scores were: 1. It’s Valderrama. 2. Gusty 20mph winds. 3. Cork trees. 4. It’s Valderrama” – European Tour player Paul Waring aces it.

“Oh Valderrama you beast. You are mean and horrible. You are soul destroying and you mess with my head. You are beautiful and perfect. For all the terrors, I still love you!!!” – Thomas Bjorn on his version of love/hate.

“Very positive week at #NIOPen top 20 in my first @ChallengeTour event of this crazy year. @GalgormCastle fantastic hosts as usual. Course was great all week. Huge thanks to @teamirelandgolf for the opportunity and support this year #onwards&upwards” – JR Galbraith taking the glass half-full attitude after finishing leading home player in the Northern Ireland Open.

George Burns stood out on tour for a number of reasons, but mainly for his physical size: at 6-ft 2-inches and weighing in at 200lbs, the former collegiate American footballer – who switched from gridiron to golf – was a serial contender with no fewer than 80 top-10 finishes in his PGA Tour career. One of his four PGA Tour career wins came in the Bank of Boston tournament where a four-round total of 17-under-par 267 saw him finish six shots clear of a quartet that featured Greg Norman, John Mahaffey, Leonard Thompson and Jody Mudd.

Of ending a five-year drought since his previous success, Burns said: “It’s been a long time. I’ve had about eight or nine second-place finishes. A lot of times I’ve gone into the final round with a lead or close to the lead.”

In marking his ball on the green, Player A places the marker in front of the ball. Player B questions the legitimacy of Player A’s actions, claiming that the ball must be marked from behind. Has Player A a case to answer?

Although the vast majority of players are inclined to place the marker behind the ball when marking it on the putting surface, Player A is actually fully within his rights to place the marker in front of the ball as long as he then places the ball back behind it in its original position when replacing it. Rule 14.1a/2 uses “right behind” and “right next to” to ensure the spot of a lifted ball is marked with sufficient accuracy for the player to replace it in the right spot. A ball may be marked in any position around the ball so long as it is marked right next to it, and this includes placing a ball-marker in front of or to the side of the ball.