Behind the scenes during Open week at Portrush 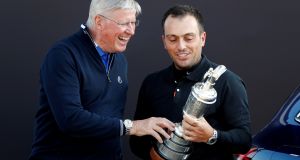 A vintage black boxy Mercedes – registration number SLA 38H – arrived through the gates of Royal Portrush Golf Club. The significance? It dated back to 1951, the last year that the British Open was staged at the club.

As if to underline how times have changed since then, a Mercedes EQC – a luxury electric SUV – rolled into the parking spot beside it and out stepped Francesco Molinari with the Claret Jug clasped to his chest. His term of ownership was coming to an end.

“Is it damaged?” asked Martin Slumbers, the chief executive of the R&A, as he took the Claret Jug from the Italian

“No, I’ve taken good care of it,” replied Molinari, who would later reveal he’d actually kept it on a top shelf well out of reach of his children for much of the year.

On another occasion, in travelling with the old trophy, he’d been so conscious of minding the jug – in its safety box – that he’d completely forgotten about the TrackMan device he had with him and left that on the airplane.

Not long after returning the trophy, Molinari’s next port of call was down to the Sky Zone, that area of the practice range where Tim Barter gets players to give a masterclass. It was his first duty in which, although still the reigning champion, the trophy was no longer in his care.

In the Links Pavilion, as spectators made their exit through the village after a sun-kissed day of practice, players and officials and sponsors, a veritable Who’s Who of those involved in the golf industry, were gathering for the Association of Golf Writers’ annual awards dinner, an established tradition of the week.

A number of perceptive fans decided to wait outside as ladies in high heels and men in suits entered the pavilion, autograph seekers waiting for their prey.

They wouldn’t be disappointed when Gary Player arrived on the scene. There are few more willing autograph givers than the Black Knight himself and he happily signed his name onto the pieces of papers, programmes and flags that were offered for his attention.

The three recipients of the awards – Molinari, as the 2018 Golfer of the Year; Wilma Erskine, the long-time general manager of Royal Portrush who is due to retire from that post next month, receiving the Michael Williams Trophy for Outstanding Services; and Graeme McDowell, receiving the Arnold Palmer “Open” Award for his facilitation of the media – were all relaxed and provided insight and humour in their acceptance speeches.

“I was a sign boy at the 1993 British Amateur and I realised competitive golf is what I wanted to do. And I remember I had to go to Wilma’s office to get paid and it was a scary prospect as a 13-year-old boy,” joked McDowell.

Although not a recipient on the night, Player too spoke.

He recalled his first Open at St Andrews in 1957.

“I was staying in a hotel right beside the course, paying 10/6 a night. The room was so small when I put the key in the keyhole, the window cracked. In the first round, I’m about to hit off and the fairway is so wide even Ray Charles could hit it – except Ian Baker Finch – and I’m ready to play.

“There’s a dour Scot who is the starter. ‘Play away laddie’, he says and I do and I hit the (out of bounds) post and the ball came back onto the fairway. ‘What’s your name?’ he says. Gary Player. ‘What’s your handicap?’ I’m a pro. ‘You’re a pro? You must be a hell of a chipper and a putter’!”

There is one press conference each year which is set in stone, although the personnel can change. For this particular outing of the R&A’s top brass – Martin Slumbers, the chief executive; Clive Brown, the chairman of The Open championship committee; Johnnie Cole-Hamilton, the executive director of championships – were on hand to answer questions.

These affairs can be informative, but generally tend to be on the rather serious side of golfing matters and, true to form, the subject matter ran along such lines. There was a question about the study of equipment, what kind of measurement criteria had been used? Another about the security challenges of Portrush. One about the R&A being even more environmentally friendly.

Then Patricia Davies – a daughter of the Causeway Coast, one of the Madill sisters who learnt their golfing craft at Portstewart – took the microphone.

“Within the R&A itself, how is the integration of women coming along? For instance, how long will it be before Clive is a woman?” she asked, to laughter, before continuing: “On the question of diversity, these two younger guys [Cole-Hamilton and Mike Woodcock, the director of communications], don’t have the white hair yet, but we’re a bit of a monochrome bunch, aren’t we? How is the diversity coming along?”

Slumbers, smiling, replied: “I’ll leave Clive to answer your earlier question,” before responding, rather more seriously, of how the R&A had launched the Women in Golf charter 18 months ago.

“It is all about getting more women and girls to be playing the game, to be working in the game. And that is gathering pace. There are over a hundred organisations that are part of that pledge and I think that we’re going in the right direction.”

An early morning alarm call is the order of the day for a huge number of spectators eager to see history.

Darren Clarke’s selection as the player to hit the first shot of the championship – at the ungodly hour of 6.35am – came as no surprise and his walk to the first tee provides the prelude to the kind of reception normally reserved for a Ryder Cup tee off.

For many of those golf fans, this is a once-in-a-lifetime chance to attend the championship.

But not everyone. I’m out following the Shane Lowry grouping – which also features Phil Mickelson and Branden Grace – when I have a chance meeting with a very familiar face.

It is Kevin Donnelly, a hugely-respected Dublin businessman, but in this week of weeks such commercial matters are put aside as he joins up with a group of friends who meet at the Open every year.

This is his 29th British Open – a week-long affair each and every time – and he plans on writing a book one day when he reaches his 52nd.

Why 52? Well, that’s because he can write of a full calendar year of his life spent at the championship.

It’s strange to find Fran Caffrey camped indoors. As one of those snappers more liable to be found on top of a sand hill or crouched behind a green in various parts of the world, he has been mostly confined to indoor duties for this biggest gig of the golfing year.

“I’m normally the leader of the pack,” he jokes, of marshalling his team of Golffile photographers to capture thousands of images. Rather than being to the forefront in snapping Tiger, Rory et al at this championship, Fran has been editing and captioning upwards of 1,300 images a day for clients around the world.

The reason for his confinement is a leg injury sustained a number of weeks ago, well away from the golf course. In his off-time, Fran is a volunteer member of the Irish Coastguard which has 1,000 such personnel around the country. He is part of a 23-person team based in Drogheda, where the response time from emergency call-out to water is a quite remarkable six minutes. He damaged knee ligaments in a recent emergency rescue operation.

“I’ve been doing it now for 13 years and, last year alone, was involved in 80 emergency call-outs. Most of them have to do with someone entering the river in Drogheda, because it is a really dangerous stretch of waterway,” said Caffrey, who was one of a number of volunteers to receive a Ministerial award for their life-saving efforts.

Caffrey’s photography career sees him covering over 20 tournaments around the globe each year, as well as amateur tournaments here in Ireland.

“It’s really strange to be taking pictures at, say, the US Masters or the US Open, and within a couple of days racing out the door on an emergency call out.”

1 Club World Cup to be proposed as alternative to Champions Cup
2 Angling Notes: No specific restrictions yet on recreational angling
3 Ken Early: Mick McCarthy II was no blockbuster, more of a flop
4 Pep Guardiola’s mother dies of coronavirus aged 82
5 New PGA Tour schedule could bring an end to the year like no other
Real news has value SUBSCRIBE

Liverpool reverse decision to use government furlough scheme 18:55
McLaren boss warns coronavirus impact could threaten Formula One 18:45
New PGA Tour schedule could bring an end to the year like no other 18:42
Jones says new players will form 60 per cent of England’s next World Cup squad 18:30
Travel restrictions could hit Ireland hard when racing returns 17:34
Here is your handy guide to sport on television this week