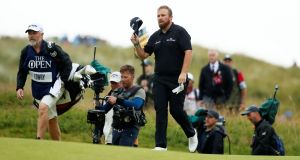 He’s the boss, the one who calls the shots; the one who hits them too. Ultimately, Shane Lowry - in the heat of competition - it is the one who decides what club to use, and where to hit it. All of this was evident in how the 32-year-old worked his way around the Dunluce links in the second round of this 148th British Open but, behind Lowry, and especially by his side, there is a team that helps fit all the components together to make it work.

The significance of how much difference a year has made to Lowry shouldn’t be underestimated, for it was exactly 12 months ago - to the day - that Lowry left Carnoustie with a missed cut, his fourth straight in the championship that means so much to him, and seemingly at odds with himself and where he was heading.

It was also relevant for another reason, as it was then - actually after a discussion following Thursday’s first round - that he departed company with his longtime caddie of nine years, Dermot Byrne.

On that day of the second round, Lowry’s coach Neil Manchip also fulfilled the role of stand-in bagman (they missed the cut by two) and, while Lowry’s brother Alan became a temporary replacement in the ensuing weeks, including a successful stint at the US PGA where he finished tied-12th, ultimately it was veteran caddie Brian “Bo” Martin who got the permanent job.

In casting a glance back to the same day a year ago, Lowry remarked: “I suppose I struggled at the Open in Carnoustie last year. I didn’t have my caddie that I had for nine years and I was very down about how things were. I was very down about my game. And, yeah, I wasn’t in a great place mentally, I suppose.

“And I think the reason I’m so good mentally now is I feel like I know how to take the downs. I feel like the roller coaster ride is going to be there. Hopefully I have it for another 15, 20 years. You’ve got to enjoy the good times and take the bad times on the chin.”

That comes with experience, a maturity to appreciate those good times and, as he quipped of any possibility of a lie-in, his two-year-old daughter Iris will still be awake at seven in the morning wanting to play.

Lowry’s team is a closely knit one: Manchip - his coach going back to his amateur days - plays a pivotal role in not only working with the player on his swing, but also as a confidant, a case in point being how the duo engaged in a 40-minute talk on Wednesday to ensure the player entered the championship in as relaxed a frame a mind as has been apparent over the first two days.

Less visible, but also important, is the role played by fitness performance coach Robbie Cannon, while the overseers, so to speak, of the whole operation are Horizon Sport - his handler Brian Moran and company founder Conor Ridge - who manage his affairs.

Up front and visible, though, is the relationship between player and caddie. Splits happen all the time, as player and caddie decide to go their separate ways. Twelve months on, Lowry wouldn’t have a bad word said about Byrne. “I wouldn’t blame anything on my last caddie. I think I was maybe just not mentally very good and my golf wasn’t as good as it is now. But I’m obviously in a good position now.”

Martin, though, has brought his own style to the on-course partnership. Although he missed the recent Irish Open - on enforced parental leave as Lowry insisted he stay home with his newborn - Martin, a good amateur player in his day who competed in the North of Ireland on numerous occasions, returned to his bag for this week’s quest for a breakthrough Major win.