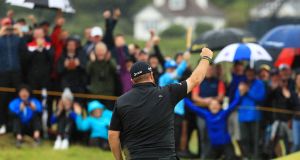 The very thin line which exists at elite sporting level was demonstrated by the raucous, spine-tingling receptions afforded to Shane Lowry and Rory McIlroy on departing the 18th green at Royal Portrush on Friday evening: for one, Lowry, it was acclaim for his efforts in reaching the midpoint of this 148th British Open in a share of the lead; for the other, McIlroy, it was acknowledgment of a herculean effort in attempting to survive the midway cut.

Unfortunately for McIlroy, his quest failed. By one stroke. Oh, how he might look back on absent-mindedly missing that tiddler of a putt on the 16th in the first round. Ifs and buts and maybes, but the 30-year-old Northern Irishman’s second round - a 65 compared to his opening 79 - provided evidence of his resolve in attempting to salvage a seemingly lost cause. At least he went down fighting.

Yet, on a day of grey skies and soft rain, it was Lowry who moved sure-footedly, almost ignorant of any inclemency, onwards and upwards in a quest for the Claret Jug. The 32-year-old Offalyman - cheered on as one of their own from tee-to-green throughout the giant dunes - shot a second successive 67 for a midway total of eight-under-par 134 which left him tied for the lead with another bearded man, the Kentuckian JB Holmes.

McIlroy’s absence from the weekend may seem akin to Hamlet without the prince. But his was not the sole cause of despair, as Darren Clarke’s triple-bogey on the 18th - barely failing to hide his anger after failing to escape a bunker - made it also a case of Lear without the king. The time for Lowry to step to centre-stage, perhaps?

Indeed, only Lowry and local hero Graeme McDowell - who shot a 70 for 143 - of the Irish sextet managed to make it into the weekend; British Amateur champion James Sugrue was unlucky to - like McIlroy - also miss the cut by one stroke, after suffering a lost ball on the 14th, in running up a triple bogey. Clarke and Pádraig Harrington took two too many, when the cut fell on 143 with 73 players surviving into the final 36-holes. No Rory. No Tiger. No Gary Woodland, either.

Lowry’s round got off to a scintillating start, with birdies on the opening three holes. He covered the front nine in a low 31 and, after holing a 25 footer for birdie on the 10th to open a two stroke cushion, only came back with a three-putt bogey on the 14th and a finishing bogey on the 18th where he semi-duffed his 8-iron approach, came up short of the green and failed to get up and down to save par.

But there was, too, a number of fine par saves on that inward journey. On the Par 3 16th - known as Calamity Corner - for one, after his tee shot spun back off into thick greenside rough above the chasm.

And, notably, on the Par 4 17th where - at the top of his swing on the tee - he was distracted by commentary, of himself, from a large nearby on-course TV screen which had the volume a tad loud for Lowry’s liking. “I could hear Jay Townsend commenting on my shot. Just on my backswing he said, ‘he’s got 295 to the top of the hill’. Yeah, that put me off.”

On that hole, known as Purgatory, Lowry’s drive leaked right to finish up behind the 18th tee where he was able to take line of sight relief. Although Lowry’s approach initially found the green, it bounded on into a swale, from where he rescued matters with a deftly played up-and-down to save par.

Lowry, without a career Major, but with victories in WGCs and Rolex Series events, also has the experience of contending in the 2016 US Open at Oakmont - where he led into the final round - to utilise heading into the second half of this championship.

Of his position of heading into the weekend, Lowry observed: “I just feel like I’m in a great place. I don’t think the consequences are as bad, and I feel like that’s why I’m so good mentally at the minute. I’m just trying to take one day at a time. Just try and shoot the best scores that I can. If I give myself a chance to do something very special here on Sunday, no matter what happens it will be a great week. Hopefully I can go out tomorrow and shoot a decent one. But if I don’t, it won’t be the end of the world.”

A further insight in Lowry’s competitiveness, though, came from McDowell, one of those cast in the role of pursuer. “I’d say Shane is probably one of the most competitive people I’ve ever met in my life. It doesn’t matter whether you’re playing credit card roulette for dinner, or playing cards, or whatever; or playing nine holes on a Tuesday . . . Shane’s the guy trying to beat you. He’s the guy trying to win. His competitive spirit is unbelievable,” said McDowell.

Lowry and Holmes - another seeking a breakthrough career Major - held a one stroke lead over Englishmen Tommy Fleetwood and Lee Westwood, with Cameron Smith, Justin Rose and Justin Harding a stroke further back in a share of fifth.

Ominously, Brooks Koepka - winner of four Majors since 2017 and with a run of 2nd-1st-2nd in the three Majors so far this season - remained in contention, three strokes behind the co-leaders. “I’m hanging around, I guess. Just close enough,” said Koepka, the world number one.

The following players missed the Cut: