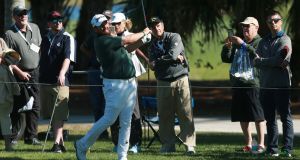 Shane Lowry of Ireland plays a shot on the 10th hole during the first round of the Honda Classic at PGA National Resort and Spa in Palm Beach Gardens, Florida. Photo: Matt Sullivan/Getty Images

British Open champion Shane Lowry flew out of the blocks on the first day of the Honda Classic before slipping back somewhat on the back nine, eventually signing for a round of 69 to sit at one under, three off the clubhouse lead.

Lowry got into his stride straight away, with a birdie on the Par 4 first hole where he hit a wedge approach to 14 feet and rolled in the birdie putt. Up and running, he then claimed back-to-back birdies on the Par 5 third, where he got up and down from a greenside bunker, and rolled in a 28-footer on the fourth to get to three-under.

At that point, Lowry was in a share of the lead with England’s Tom Lewis, but the birdies dried up for the remainder of the front nine and the Offalyman then hit a wall. On the difficult Par 4 11th hole, a wayward drive put Lowry into trouble and it got worse for him when, off a difficult lie, he hit his approach into the water guarding the green. Lowry ran up a double-bogey six to drop back to one-under.

Then, on the Par 13th, a putter which had behaved so well finally let him down as Lowry three-putted for a bogey.

Heading into the feared Bear Trap – that run of holes from the 15th to the 17th – the 32-year-old was far from intimidated. On the Par 3 15th, a beautifully flighted tee-shot saw the ball finish 20 feet left of the pin and he rolled in the putt to get back under-par but failed with a birdie putt on the 16th.

Two pars to finish would leave Lowry under par for the tournament and nicely placed heading in to Friday.

Pádraig Harrington, a two-time winner of the tournament, had four bogeys and two birdies in an opening round 72.

Joint clubhouse leader Lewis has endured more ups-and-downs in his career than thrillseekers would get on a rollercoaster. But the 29-year-old has found some equilibrium of late, and the Englishman – who has savoured the joy of winning events on the European Tour and also the agony of losing his tour card – made a dramatic impact in firing a bogey-free four-under-par 66 to share the first round lead with American Harris English at PGA National in West Palm Beach, Florida.

On a course with a reputation for being one of the toughest on the PGA Tour, Lewis – who had 10 straight pars at one point in a display of maturity – birdied the 18th to claim the early clubhouse lead, before being joined late in the day by English.

Lewis’s two wins on the European Tour both came in the Portugal Masters, some seven years apart. His first win was achieved in 2011 just weeks into this professional career but he would lose his tour card in 2016 and had to go down to the Challenge Tour to rediscover his game before returning to the main circuit to again win in Portugal in 2018.

His passage to a place on the PGA Tour came with a win in the Korn Ferry Championship late last year.

“I’m not a patient person. I beat myself up quite easy. But I shouldn’t do that. I would have done better in my career if I was a bit more positive about myself, if I believed as much as everyone else believed in me, I think I would have done a hell of a lot better. But I’ve got to learn that. I’ve got to do it for myself. But I just would say that any successful businessman or sportsman has always had adversity in their life, and you’ve just got to get through it and believe that good things will happen,” said Lewis.

1 Sonia O’Sullivan: Taming The Tan gave us one last roll of the dice before shutdown
2 Avoid the treadmill at all costs – marathon training in the 2km radius
3 Premier League stress to PFA that players need to take pay cuts
4 Ireland’s underage rugby stars miss out on chances to shine at Easter
5 Final record attempts before lockdown; underage rugby feeling the effects
Real news has value SUBSCRIBE