Shane Lowry well aware that silence can be golden at times 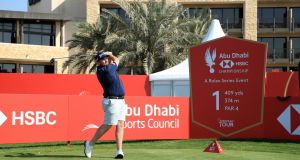 Shane Lowry heads into his opening tournament of the season in Abu Dhabi Championship as aware as anyone of the importance for maintaining a code of silence, on a couple of fronts.

The topic of the so-called “hot mics” has resurfaced in light of Justin Thomas’s recent fine by the PGA for using a homophobic slur during the Sentry Tournament of Champions, which also left the American – also in the field for this week’s Abu Dhabi Championship – losing long-time clothing sponsor Ralph Lauren who noted his actions conflicted with their “inclusive culture”.

And Lowry knows from first-hand experience how on-course microphones – an ever-increasing emphasis of television coverage – can land players into hot water; while, secondly, he has adopted a different vow of not discussing anything related to the Ryder Cup in his contacts with captain Pádraig Harrington.

Lowry’s use of language was directed at himself during the 2016 Honda Classic, when an errant shot into water led to an exasperated declaration of, “f*****g idiot” on live television and which resulted in a monetary fine from the PGA Tour.

“I got caught out before. I got penalised for it. It’s tricky. We’re out there, it’s your livelihood. You’re out there under high-pressure situations. The way I am, I wear my heart on my sleeve. I give my best everyday. Sometimes I can get hot under the collar. You need to be careful when you do say and you need to watch what you’re saying . . . the microphones do get very close at times, especially when you’re under a high-pressure situation,” said Lowry, who added he was “not condoning what anyone says”.

Indeed, Lowry highlighted how the “hot mic” usage can be productive in situations: “Phil Mickelson and Bones [were] famous for their conversations, there’s one from the Open [in 2019] of myself and Bo and it’s great in those situations that people really get to interact and see how we go about our business. But in another situation, when people hit bad shots, they’re going to let out anger and you have to weigh up the options and see what’s the best.”

Lowry, who hasn’t played competitively since the RSM Classic the week after the Masters last November, has committed to a three-week stretch in the Middle East that also takes in next week’s Saudi International and the Dubai Desert Classic before returning to his US base in Florida as he then concentrates his efforts on the PGA Tour up to the US Open in June.

Lowry undertook some warm-weather practice – with coach Neil Manchip out in Florida for the week, where he played the Bears club and Seminole – before heading to Abu Dhabi and took in a practice round with Harrington . . . but with the Ryder Cup not playing any part of their discussions.

“It’s funny, we never talk about it,” observed Lowry, who is intent on letting his clubs do whatever talking is needed to make it to Whistling Straits : “I don’t want to leave it to [Harrington] to have to pick me, because I know how hard a decision that would be . . . I want to make the team and he knows that more than anything. I’m going to be doing my best. Golf’s a funny game. We don’t know what is ahead of us, I’ll go out and give it my best every day and see where it leaves me.”

Of making his seasonal debut, Lowry added: “My motivation never changes. Anybody who knows me knows I’m one of the most competitive people you will come across. Even playing with Pádraig [in practice] and I’m trying my best to shoot the best score I can to win that.

“The next big tournament I would like to win would be this one. Every tournament I play I’m trying to win. You don’t win them all. You just have to take your chance when you get it. I come out here and give my best week-in, week-out to try and compete.

“My motivation has never been stronger. I probably have more motivation than I ever had to go out, play my best, answer some questions I have of myself or maybe that other people had. I’m ready to hit the ground running this year and hopefully I can get off to a good start this week.”

The course: Abu Dhabi Golf Club – Par 72, 7,642 yards – is designed by Peter Harradine and has played host to the championship since its inception in 2006. The course was constructed on a salt flat and required a feat of engineering as well as a significant amount of earth-moving to develop the mounding around the layout. The two signature holes are the ninth and 18th, which bring two of the course’s seven lakes into play. Windy conditions should accentuate the challenge.

The field: Justin Thomas, the world No 3, headlines a strong field that also features Rory McIlroy and Tyrrell Hatton from the world’s top-10. Lee Westwood is the defending champion while Shane Lowry and Tommy Fleetwood are past champions.

Quote-Unquote: “It’s always good coming back to a tournament and a venue where you’ve won before. You have that little bit of confidence.” – Lee Westwood who claimed his 25th career title on the European Tour when winning the tournament last year.

Irish in the field: Rory McIlroy, Shane Lowry, Graeme McDowell and Pádraig Harrington complete a quartet of Irishman making their seasonal debuts in an event which restarts European points list qualifying for the Ryder Cup.

Betting: Rory McIlroy is the market leader at 11-2 with Justin Thomas at 6-1 but better value can possibly be found a bit down the betting with Matt Wallace priced at 33-1 while each-way value looks decent on Laurie Canter at 66-1 who had a strong finish to the 2020 season that included three top-5 finishes in seven tournaments.

On TV: First round coverage on Sky Sports Golf (from 3.30am and 11am Thursday).