Lowry and Harrington avoid the elephant in the room 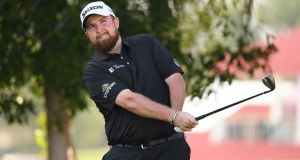 Shane Lowry: “I don’t want to leave it to (Harrington) to have to pick me, because I know how hard a decision that would be.” Photograph: Ross Kinnaird/Getty Images

It’s not unusual for Shane Lowry to hook up with Pádraig Harrington at golf tournaments. Play a few holes, have short game duels, some putting competition. To generally shoot the breeze. Except, one thing has remained off limits at the European Tour’s resumption in Abu Dhabi this week; a sort of Omerta code between the two that has barred any mention of the Ryder Cup, where Harrington will be Europe’s captain later this year, and Lowry numbers being a player as one of his season’s goals.

The two got together for a few holes of practice in the emirate in prepping for the Rolex Series event and talked about everything except the Ryder Cup.

“It’s funny, we never talk about it,” observed Lowry, who is intent on letting his clubs do whatever talking is needed to make it to Whistling Straits : “I don’t want to leave it to (Harrington) to have to pick me, because I know how hard a decision that would be . . . I want to make the team and he knows that more than anything. I’m going to be doing my best. Golf’s a funny game. We don’t know what is ahead of us, I’ll go out and give it my best every day and see where it leaves me.”

With the European points lists restarting in Abu Dhabi, having been put on hold last summer as the impact of the coronavirus hit, Lowry - currently outside an automatic place - at least returns to a familiar and happy hunting ground (having won the tournament in 2019) for what will be a three-week stint in the Middle East, also taking in next week’s Dubai Desert Classic and the Saudi International.

After that, it will be back to his American base in Florida for a run of tournaments stateside up to the US Open before any thought of returning to play in Europe, most likely at the DDF Irish Open at Mount Juliet at the start of July.

Lowry has done things differently this year in his preparations. He spent the past few weeks in the United States - settling in his wife Wendy and daughter Iris - and getting in warm weather practice at The Bears Club, where he is a member, and also at Seminole in getting ready for a return to competitive play. Indeed, his last time to have a card in hand was at the RSM Classic last November.

“It worked out well. Obviously, I’m a member at the Bears Club, which is obviously one of the best practice facilities you can get, and Neil (Manchip) came over and spent a full week with me so we got some good work done . . . I feel like my game is good. I’m playing nicely in practice but we all know sometimes that doesn’t always transform into good form on the course, so we’ll just wait and see,” said Lowry, who added: “My motivation never changes. Anybody who knows me knows I’m one of the most competitive people you will come across. Even playing nine holes with Pádraig (in practice) and I’m trying my best to shoot the best score I can to win that.

“The next big tournament I would like to win would be this one. Every tournament I play I’m trying to win. You don’t win them all. You just have to take your chance when you get it. I come out here and give my best week-in, week-out to try and compete. My motivation has never been stronger. I probably have more motivation than I ever had to go out, play my best, answer some questions I have of myself or maybe that other people had. I’m ready to hit the ground running this year and hopefully I can get off to a good start this week.”