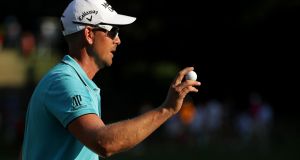 Henrik Stenson leads by a stroke heading into the final round in Greensboro. Photograph: Streeter Lecka/Getty

Henrik Stenson remained patient before reeling off three consecutive birdies to earn a one-shot lead after the third round at the Wyndham Championship on Saturday.

A double-bogey at the par-three seventh proved only a temporary setback for Stenson, who carded four-under-par 66 on another ideal day for low scoring at Sedgefield Country Club.

Shane Lowry is four shots off the Swede’s lead, after a rollercoaster finish left him in the mix in Greensboro.

The Offalyman reached the turn on one over par and with his challenge threatening to flatline, however a thrilling back nine which included four birdies, two bogeys and an eagle three on the 15th saw him sign for a 67 - leaving him 12 under par for the tournament and four strokes off the lead.

However Padraig Harrington and Seamus Power’s weekends have both come to a premature end after they fell foul of a second cut following the third round.

11 golfers were trimmed from the field after too many players made it inside the second round cut mark - meaning Harrington’s third round 76 and Power’s 74 - which saw them slip back to level and one over par respectively - weren’t enough to make it into Sunday’s final round.

Love, already the third oldest winner after his success at the tournament two years ago, surged into contention with an outward nine of four-under 31, but stalled on the inward half.

Stenson, on the other hand, made his move late.

“Things weren’t going great in the middle of the round but I was hanging in there and hit a couple of nice shots and made a couple of putts coming home and we find ourselves right where we want to be for Sunday,” said the world number nine.

“I hit a lot of good putts and I’ve been hitting a lot of good iron shots as well, trying to attack the hole and that’s been working nicely so far.

“I’ve been in contention a lot this year so it feels nice to be out there again. I feel I’m in a good place mentally.”

Stenson’s two dropped shots at the par-three seventh came after his mishit seven-iron found a water hazard short of the green.

“I’m very hungry to win again but right now I got dinner on my mind,” said Simpson, a four-time tour winner, including the 2012 U.S. Open.

Na, also one back, is seeking his second tour victory, while Schniederjans is after his first.