Justin Thomas: US PGA always had ‘a special place in my heart’

‘It’s just a great win for the family, and it’s a moment we’ll never forget, all of us’ 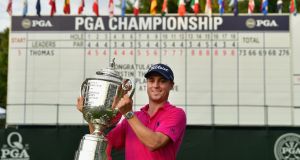 Justin Thomas admitted the US PGA Championship always had a “special place in my heart” after claiming his first major victory at Quail Hollow.

Thomas carded a closing 68 in a thrilling final round to finish eight under par, two shots ahead of Patrick Reed, Louis Oosthuizen and Francesco Molinari.

Rickie Fowler and Hideki Matsuyama shared fifth place on five under with Kevin Kisner, who needed to eagle the 18th to force a play-off but ran up a double bogey, dropping back into a tie for seventh with Graham DeLaet.

Fittingly for a tournament which invites 20 club professionals to compete, both Thomas’s father Mike and his grandfather Paul were PGA professionals.

“As a kid growing up, being a golf fan, you want to win all the majors. You want to win any major,” Thomas said. “For me, the PGA definitely had a special place in my heart.

“This was really cool for this to be my first one and have my dad here, and I know grandpa was watching at home. I was able to talk to him and that was pretty cool. It’s just a great win for the family, and it’s a moment we’ll never forget, all of us.”

The 24-year-old, who became the youngest player to shoot 59 on the PGA Tour on his way to winning back-to-back events in Hawaii in January, admitted he enjoyed his share of luck in the final round, particularly on the par-five 10th.

His hooked drive bounced off the trees and back into the fairway, from where he was almost able to find the green. After chipping to eight feet Thomas saw his birdie putt hang on the edge of the hole for nearly 10 seconds before it eventually dropped in.

“The putt on 10 was funny because it snuck up on the hole,” he added. “We read it going back a little back right and it never did.

“I kind of acted like a child and threw a little tantrum, but then it went in and I didn’t look so dumb.”

Thomas is a long-time friend of Open champion Jordan Spieth, who was among the players to embrace him beside the 18th green despite having finished his round hours earlier.

And he revealed his girlfriend was only there because he persuaded her to change a scheduled flight home because he was confident of victory.

“I hate to admit this but I’m kind of superstitious and weird about the night before, or when I get in contention, about people saying stuff,” Thomas added.

“(But) I truly felt like I was going to win. I remember my girlfriend was supposed to fly out at about 7.00pm and I was like, ‘You need to change your flight to later, because I don’t know, I just feel like I don’t want you to miss this. I feel like I’m going to get it done.”