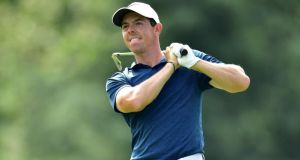 Rory McIlroy will defend his FedEx title after announcing he will take part in the playoffs. Photograph: Stuart Franklin/Getty Images

Rory McIlroy will try to defend his FedEx Cup title after deciding against sitting out the rest of the season to rest a persistent rib injury.

Speaking after a tie for 22nd in the US PGA Championship last Sunday which completed a third successive year without a Major title, McIlroy said he was in two minds about competing again in 2017.

“I don’t know what I’m going to do,” McIlroy, who has played just 13 events this season, said after a closing 68 at Quail Hollow. ”You might not see me until next year. You might see me in a couple of weeks’ time.“

After seeking the advice of sports scientist Steve McGregor in Northern Ireland, McIlroy chose the latter option and posted a link on Twitter on Friday evening to a competition to win the chance to play with him during the pro-am ahead of the BMW Championship in September.

And his manager confirmed to Press Association Sport via email that McIlroy intends to contest the play-offs and try to win the overall FedEx Cup title – and $10 million (€8.5 million) bonus – for the second year in succession.

McIlroy said he could feel his left rhomboid muscle going into spasm as he spoke to the media after his final round at Quail Hollow, adding that his left arm also went numb.

The 28-year-old admitted he already had one eye on next April’s Masters, which he needs to win to complete the career Grand Slam.

“I feel like I’m capable of playing well enough to give myself a chance in it,” McIlroy said of the FedEx Cup. ”At the same time, April is a long way away. That’s the next big thing on my radar.

“I feel like I have a sense of, not duty, but I’ve missed a lot of time already. If I’m capable of playing, I feel like why shouldn’t you.

“But then at the same time if you are not capable of playing at your best, why should you play. It’s a catch-22.”

World number four McIlroy is currently 41st in the FedEx Cup rankings and needs to be in the top 30 to qualify for the season-ending Tour Championship in late September.

The playoffs get under way with the Northern Trust Open on August 24th and McIlroy is the defending champion of the Dell Technologies Championship the following week.

No further players to be called up to Ireland squad to face Georgia 15:14
Jack Grealish admits to careless driving after lockdown crash 13:22
Eddie Brennan steps down as Laois hurling manager 13:14
Thomas Galligan and Cavan raring to meet Dublin in Croke Park 12:30
Willie Mullins’ former star mare Laurina is retired 12:35
Here is your handy guide to sport on television this week