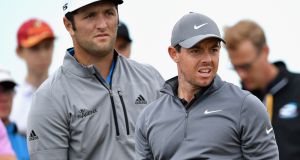 Rory McIlroy and Jon Rahm during practice ahead of the British Open. Photograph: Stuart Franklin/Getty

If Rory McIlroy needed any further incentive to win a second Open Championship, it was delivered by another sport. Novak Djokovic’s Wimbledon triumph, his first since 2015, resonated with the 29-year-old as he looks to reclaim the Claret Jug he won at Royal Liverpool four years ago.

“The Open is massive and I was very honoured to win it,” McIlroy said. “Seeing Novak winning Wimbledon, he hadn’t won it in a while, and the emotion he showed after that was really cool. Golfers and tennis players are similar in the sense that they’re both trying to win four tournaments and it is a huge deal. And if you’ve won some, you really want to win more.”

The time lapsed since McIlroy was in the winner’s circle at a Major is explained in part by two serious injuries. “Four years is nothing in a career in golf but at the same time, at the rate I was winning them, yes, it feels a long time,” McIlroy acknowledged.

That his season to date is regarded by some as mediocre is also strange. McIlroy has a single PGA Tour victory to his name this season, the same as Jason Day, Dustin Johnson and Justin Thomas. Jordan Spieth has not won since the Open of 2017.

McIlroy senses salvation may arrive in Scotland. During 18 holes in the company of Jon Rahm early on Monday the four-times major champion used his driver with great regularity. Burnt Carnoustie fairways – and more importantly, thin rough – offer opportunity, McIlroy believes. This marks an alternative strategy to that of the majority of the field, who will be using irons from most par-four tees.

McIlroy added: “Jon and I had good chat and the way the rough is, there’s not much of it, someone like us who can fly it over 300 yards, you’re basically taking all the trouble out of play on a lot of holes. Obviously you have to pick your points but I think you’ll see the big hitters play very aggressively. Get it down there with wedge in hand and you’ve got a big advantage.

“I never thought in the past of hitting driver at the first here but if you hit it down the left there you can get it on the green.

“I alluded to this at the Irish Open, as time goes on you see trouble more but it’s interesting playing a practice round with Jon. He just hits driver and I’m thinking: ‘I used to do that.’ If you can do that, it’s a big advantage.”