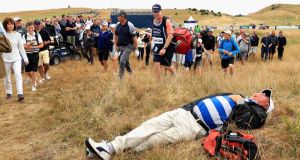 A spectator sleeps in the grass as Pádraig Harrington passes by during the Scottish Open at Gullane GC in Gullane, Scotland. Photograph: Andrew Redington/Getty

Rory McIlroy was out on the putting green, with caddie Harry Diamond dutifully retrieving balls, blissfully unaware that someone had taken it on himself to defend the Northern Irishman’s honour in terms of his career Majors haul.

That man was Pádraig Harrington, who was responding to a question of why McIlroy’s wins in the Majors – his last of four came in the 2014 US PGA at Valhalla – had “dried up”. Like a lawyer defending a client, Harrington coolly considered his words before offering the rebuttal.

In making his case, Harrington argued strongly that McIlroy’s career so far shouldn’t be judged quite so harshly; and that time, when compared with other players who had made it into double digits in career wins in the Majors, was definitely still on his side.

As Harrington put it: “Clearly, his career is now solely based on how he does in the Majors. There seems to be no other yardstick for Rory, and that’s probably the yardstick he uses himself. I think back in 2011 [when he won his first career Major at the US Open] he had stolen a march on the field when it came to driving the golf ball, which brought tremendous confidence to his game and all through his game. I think at this stage players have caught up. There’s many players who drive the ball comparable [distances] and have eaten into that advantage.

“Rory is well on pace to get into double-digits with the Majors, but it has got harder. There’s no doubt there’s more players out there who are capable of having a big week and a big game for a Major. It makes it tough. But some of the best players still have got one or no Major or two Majors. So Rory’s doing pretty well at four!”

McIlroy’s four career Majors came in a four-year span from 2011 to 2014, the winless stretch since now edging to the same time span.

But Harrington’s point is well made in that historically players – even Jack Nicklaus – needed time. Nicklaus won his 18 Majors over 24 years; Woods won his 14 Majors over an 11-year dominant streak, but hasn’t won since 2008; Gary Player’s nine career Majors were over 19 years; Nick Faldo’s six were over a nine-year span, and Seve Ballesteros’s five were also over a nine-year span.

“You’re judging Rory over seven years . . . . give him another seven years and see if he’s got eight in the bag. Are we disappointed with that then?” wondered Harrington.

Harrington’s own haul of three Majors came in quickfire fashion, with those back-to-back Claret Jugs followed by a win in the 2008 US PGA. His best finish in any Major since then was a tied-fourth in the 2012 US Open, although he figured into the final round of the Open at St Andrews in 2015 only to eventually finish in tied-20th.

A missed cut at the Irish Open and another missed cut at the Scottish Open hurt. But he has made a promise to himself to, as he put it, “smell the roses” this week. Certainly, he is of the opinion that, on such firm fairways with the grasses scorched, experience could be an important component in combating the fiery links.

And Harrington remains unequivocal on one point; that this is the toughest course on the Open rota.

“I do think this is the hardest, no doubt about it. There’s hardly a [fairway] bunker that you can play to the green from. They’re all mini-hazards ; if you’re hitting in, you’re pitching out. And the last four holes can be brutish. No matter how you’ve done in those first 14 holes, you still have to get home to the clubhouse in those four holes. It’s a difficult stretch in golf, and to have them as the last four holes of a championship really is what makes Carnoustie as tough as it is.”