Tiger Woods starting to get his feel for Major glory back 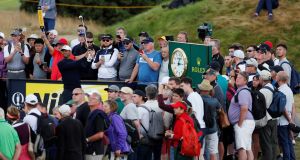 What do you make of the new Tiger Woods? Inside, does the old competitive fire still burn? Are appearances deceptive?

From the outside, there’s a Zen like state of calmness, almost as if his mind has been left open to explore whatever possibilities life now brings; and, yet, listening to him, picking through his words, there’s a betraying thirst of wanting what once came so frequently but which has become unattainable since his comeback: what he called “Ws”, as in wins.

A reminder of the old Woods was on evidence on the course on Tuesday. It was in a work of art, carefully covered in bubble wrap, which portrayed the golfer in his Sunday red shirt and black trousers punching a fist into the air to celebrate one of those victories. The two women in possession of the artwork, originally from Belfast, were on a mission to get him to sign the canvas, the work of their friend.

In the old days, you’d have been tempted to say, “good luck with that.” But the perception of the new Tiger Woods is of a more easy-going figure, so who knows, maybe their search - if they managed to find him - was one that might have found success.

For Woods, the mission this week, on the sort of links terrain that he so loves, is to mark his return to this 147th Open with some of his old bravado. Woods - a three-time winner of the Claret Jug - last played in the championship at St Andrews in 2015 when he missed the cut. Injury subsequently ruled out him of the past two championships, yet watching events unfold on television brought back the ache to be part of it all again.

“There were definitely points in time I certainly thought I’d never play in this championship again. It’s great seeing it on TV, but it’s even better in person. I remember how it feels to come down to the last hole with a chance to win it. And knowing that I may never have that opportunity again, there were some times in there where I just didn’t feel very good. But now to have the opportunity to come back, it’s been a blessing. There were some times where I didn’t think I’d ever be able to do this again, and lo and behold, here I am playing my third Major of the year.”

Woods’s return to the Masters at Augusta saw him finish in tied-32nd, a long way behind Patrick Reed but at least back, while he wasn’t alone of those who went to the US Open at Shinnecock Hills with great expectations only to be among those dispatched early with a missed cut beside their name.

Links golf is different, though.

“I’ve always loved links golf, it’s my favourite type of golf to play . . . I enjoy this type of golf because it is creative. We’re not going to get the most perfect bounces. You know, a certain shot that is hit you think is a wonderful shot down the middle of the fairway could bounce some weird way. That’s just part of it, and I think that’s the fun challenge of it. I mean, feel has a lot to do with playing the Open and I think the guys traditionally over the years who have done well have been wonderful feel players and also wonderful lag putters because a lot of times it is difficult to get the ball close and have numerous putts from about 40, 50 feet,” explained Woods.

For this examination, Woods has tinkered with his club set-up. The 2-iron which would normally have a 20 degrees loft has been adjusted to 17 degrees for a lower ball flight. “Each tournament I keep coming back to, I keep feeling a little bit better because I’m starting to play some golf again. My feels are much better than they were at the beginning of the year, and I feel like I have a better understanding of my game and my body and my swing, much more so than I did at Augusta.

“That’s just going to come with a little bit more experience, and I think that I’ve made a few adjustments, as you’ve seen so far. I’ve changed putters. I’ve tweaked my swing a little bit (since returning) and everything’s gotten just a little bit better. I’ve put myself up there in contention a couple times. Just need to play some cleaner golf, and who knows?”