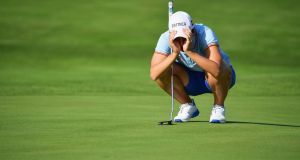 Carlota Ciganda lines up a putt during day one of the Evian Championship at Evian Resort Golf Club in Evian-les-Bains, France. Photograph: Stuart Franklin/Getty Images

Spaniard Carlota Ciganda enjoyed the local atmosphere to share the first-round lead with Maria Torres at the Evian Championship in France on Thursday.

Ciganda birdied her final two holes for a six-under-par 65 in pleasant conditions at Evian-les-Bains in the final women’s Major of the season, while Puerto Rican Torres enjoyed her lowest round in her rookie season on the LPGA Tour.

“I love this place, love being in Europe, my parents are here, some friends, so I really like the atmosphere,” said world number 18 Ciganda.

“It was a great round for me today. Off the tee I hit a lot of fairways and then I was hitting it close on the green, especially on the back nine, and then I played really good on the par-fives, three under.”

Ciganda has won twice on the LPGA Tour, both times in 2016, and has been knocking on the door in the Majors this season, finishing third at the US Women’s Open.

“I like tough courses and I like playing the Majors,” said the 28-year-old from Pamplona. “I know I have to be mentally tough.”

Torres sounded positively thrilled not just by her lofty position, but simply to be playing on the big stage.

A year ago she was with her family in Puerto Rico as Hurricane Maria ravaged the Caribbean island.

She barely squeaked through LPGA qualifying school to become the first woman from Puerto Rico to get full playing status and, after a tough baptism on tour, she has found her feet with two recent top-10 finishes.

“All these things happened and it went good,” Torres said.

“I’m grateful for all the opportunities we get ... because I never thought I was going to make it [through qualifying school].”