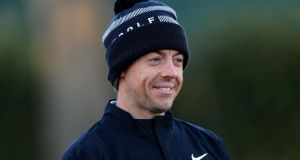 Rory McIlroy smiles during the pro-am prior to the Arnold Palmer Invitational at Bay Hill in Orlando, Florida. Photograph: Sam Greenwood/Getty Images

When seeking to join select company one might presume Rory McIlroy would be perfectly happy to keep said group as tight as possible. Not so; the Northern Irishman insists he would “love” Jordan Spieth and Phil Mickelson to join him as claimants of golf’s Grand Slam this year.

McIlroy needs only a Masters victory to take his place alongside five players – Gene Sarazen, Ben Hogan, Gary Player, Jack Nicklaus and Tiger Woods – who have won every Major. Spieth has the same scenario in respect of the US PGA Championship, with the US Open the only Major to this far evade Mickelson.

“How good would it be this year if Jordan won the PGA, Phil won the US Open, I won Augusta and three others are put into that group?” McIlroy said.

“How good would that be for golf? That would be awesome. I would love them to do it. It’s all about exposure and golf would be right in the centre of all sports stories if that were to happen. Which is great for everyone involved in the game.”

McIlroy’s awareness of that bigger picture is commendable and, perhaps, highlights an awareness of golf’s struggle to remain part of mainstream sporting vernacular.

He adopted a similarly mature theme in Orlando on Wednesday, where he was preparing for his defence of the Arnold Palmer Invitational, when offering stout backing to golf’s ruling bodies. The R&A and USGA have come under rapid fire regarding the detail and implementation of new rules, which came into force on January 1st.

“I’ve never known a sport to be so tangled up in the rules of the game,” the 29-year-old said. “They did need to be simplified, I think for the most part they have been simplified.

“I think that the governing bodies are a very easy target right now in the game of golf and it’s very easy for people to jump on the bandwagon and sort of criticise. But all these entities in golf, they’re not trying to do anything bad for the game, they’re trying to help the game in some way. So I think we all have to give them a bit of leeway here and say, yes, they probably made some mistakes, but we all do.”

McIlroy’s success at Bay Hill 12 months ago was his last in individual competition. He has returned a series of impressive performances – and top-fives – in 2019 to date and appears perfectly relaxed about the absence of victory therein.

“Obviously the more chances you have the more chances you’re going to have of getting over that line,” he said. “If I just keep the form that I’m on, I would be happy with that. It seems like one or two people play a little better than me every week I tee it up, but I’m in good shape.”

The broader picture, of dealing with Augusta pressure, also sits far more easily than before. “I’ve become more comfortable with it,” McIlroy said of his Grand Slam chase.

“The extra stress that I put myself under that first couple of years – 2015 and 2016 . . . I guess I’ve become a lot more comfortable with the fact that I’m going to fail more times than I succeed at that certain conquest or whatever you want to call it.

“So I’ve become comfortable with the fact I’ve tried four times, I’ve failed, but Abraham Lincoln lost the first elections he was ever in. He wound up being the president of the United States. So I have still got a bit of time.

“I think sometimes I’m too much of a fan of the game because I know exactly who has won the Grand Slam and I know exactly the people I would be putting myself alongside.

“So there’s maybe a part of that that if I didn’t know the history of the game and I wasn’t such a fan of it, would work in my favour. But that’s not me. It would be a massive achievement. It would be huge. But again, I can’t think about it in that way.” – Guardian

1 David Clifford sends everyone back to their corners unbeaten
2 Ashleigh Barty now living up to all her earlier promise
3 Six Nations: Ireland are contenders but England still the team to beat
4 Six Nations: A 21st-century tournament that saw Irish rugby come of age
5 Mike Catt hopes to have Irish backs purring in Six Nations
Real news has value SUBSCRIBE