Out of Bounds: Golf’s damaged reputation needs the spirit of an Arnie

Isn’t it time that someone emerged from the shadows to fill Arnold Palmer shoes? 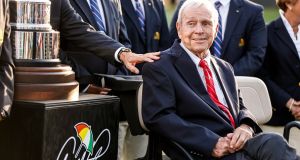 Dodgy knee drops. Caddies aligning players (or not!). Slow play. For a sport which prides itself on its self-policing ethics, these past few weeks and months have painted a rather darker picture of golf’s reputation.

Oh for the spirit of an Arnie!

This week’s Arnold Palmer Invitational at Bay Hill is one of the legacies which the great man left to his beloved sport, a tournament where he used to wait patiently behind the 18th green so that he could grasp the hand of its newest champion and radiate a smile that through the years had brought so much light to the sport.

Isn’t it time that someone emerged from the shadows to fill his shoes? Or, if that is an impossible ask, then to bring some of their own enlightenment?

For the man known as “The King,” Palmer’s legacy extends far beyond a tournament on the PGA Tour. There are the hospitals he helped fund, the golf courses he designed. And apart from such physical legacies there was also the spiritual legacy he left through his charisma.

I remember waiting to meet Palmer for an arranged interview at Winged Foot back in 2006, when the upscale New York club was playing host to the US Open. His limousine driver got lost en route and Palmer was late but his arrival was indicated by a large crowd of autograph hunters attracted to him like iron filings to a magnet.

“I thought it was hard to win the US Open. Getting in here was harder,” quipped Palmer,

It is doubtful if any other player, not even Jack Nicklaus or Tiger Woods, popularised the sport in the way that Palmer - and his Arnie’s Army of global fans - managed.

Here in Ireland, Palmer’s thumbprint has been left on his signature courses at The K Club and the majestic links at Tralee. Before, that it was his appearance in the Canada Cup at Portmarnock Golf Club in 1960 along with Sam Snead, when the Americans were runaway winners, which is recognised as popularising the sport in this country.

This is the third Arnold Palmer Invitational to be held since Palmer’s passing in 2016, the third time that a champion will walk off the 72nd without knowing that Arnie’s handshake is awaiting him. Whoever the latest champion is come Sunday evening will likely make a glance towards the sport where Palmer traditionally waited, aware of what he helped create in professional golf . . . and, perhaps, wonder where the sport he loved so much is now headed?

The number of rules violations on tour in recent months - since the Rules of Golf were simplified at the start of January - has been strange to behold. As Palmer himself once remarked, “Golf is deceptively simple and endlessly complicated, it satisfies the soul and frustrates the intellect.”

What would Palmer make of its current plight? Supposedly, the rules have been simplified, yet players - certainly on tour - seem unable to grasp the rule changes. Add in the bane of slow play, and the picture that has been painted is a messy one which needs a guiding hand.

It’s time for someone to walk in those footsteps. Hands up, someone?

1 Red Bull poised to protest over Mercedes’ new steering system
2 Nairo Quintana sustains suspected knee injury after being hit by car while training
3 Monica Seles: The warrior queen who could have been the best ever
4 Séamus Power rockets into share of clubhouse lead in Detroit
5 The Best of Times: Ireland’s Golden Generation make Grand Slam history in 2009
Real news has value SUBSCRIBE