Rory McIlroy ready to move into overdrive after Players win 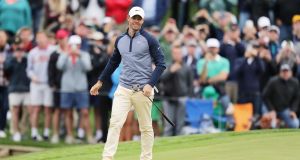 Up to the victory at TPC Sawgrass, Rory McIlroy’s results sequence had never seen him finish outside the top six in any tournament: 4th-5th-4th-2nd-6th. Photograph: Richard Heathcote/Getty Images

If Version I of Rory McIlroy has been something to behold, wait for Version II. Not yet 30 years of age, the Northern Irishman’s honour-laden professional career to date – among them four Majors, and with The Players title the latest to be added to a Curriculum Vitae that now totals 24 wins globally – is, if you listen to him, ready to move into the next phase. Into overdrive, even.

Okay, the first thing he’d to do on the morning after his Players win was to meet an interior designer about work on his newly purchased home, the kind of thing that would bring anyone back to earth; but, in terms of his golfing future, there would seem to be a stronger conviction from McIlroy that the best has yet to come.

In annexing his latest tour victory, there was something about McIlroy – a spring in his step, the interactions with caddie Harry Diamond – that showcased a comfort level in his own skin.

On the presentation podium, in accepting the trophy, McIlroy made reference to reaching a stage in his career, almost as if he were half-done and moving into territory for the next half, that excited him: “I came on tour and all I wanted to do was keep my card, and from there you grow and you learn and you become a better player. You realise that there’s a lot more you can achieve. I think all the experience that I’ve racked up over those first 10 or 11 years means that I’m way more prepared for these next 10; and if you’re more prepared, hopefully that means you can have more success,” he later elaborated.

Waiting for an answer

Like someone knocking on the door waiting for an answer, it was only a matter of time – and patience – before McIlroy returned to winning ways. Up to the win at TPC Sawgrass, his results sequence had never seen him finish outside the top six in any tournament: 4th-5th-4th-2nd-6th.

When asked to pinpoint why he’d dealt so well with so many near-misses, McIlroy – who moved two spots to fourth in the latest world rankings – responded: “Maturity. It’s been having a focus over the last six or seven months on my attitude, especially my attitude to golf, and not letting golf define who I am as a person, trying to keep the two things very separate. One thing that I used to do in the past is I’d let what I shot that day influence who I was or my mood. To try and keep those two things very separate is something I’ve worked hard on because who I am as a person isn’t who I am as a golfer. It took me a while to get to that point where I realised who those two people were.”

So many things seem to have clicked into place, with perhaps the biggest factor being much-improved putting. Some of it has to do with a confidence in the TaylorMade Spider which has been in his bag since the start of the year, and some of it to do with working with former tour player-turned-putting guru Brad Faxon.

“Brad has been a massive help . . . most of Brad and I’s work is done away from the golf course, away from the putting green. It’s catching up for a coffee. It’s chatting. He’s a very smart individual and has got a lot of experience in the game . . . so just to chat to him about certain things and how he felt on the course and especially how he felt over putts where there might have been a bit of pressure, that’s been a big help.

“We’re singling out Brad because my putting has definitely improved over the last 12 months, but everyone on my team, my caddie Harry (Diamond), my manager Sean (Flanagan), my coach Michael (Bannon), my wife Erica, everyone plays their part in me getting to this point.”

McIlroy’s only remaining competitive outing ahead of next month’s date with destiny in the Masters, when he again seeks to join the exclusive club of Grand Slam winners, will come in next week’s WGC-Dell Technologies Matchplay Championship in Austin, Texas. Yet, as he moves forward to those immediate challenges and ultimately to those further down the road, there is evidence that the route he intends travelling is more direct with fewer detours.

“I’m very comfortable with where everything is and, yes, confidence comes from that. I don’t know what comes first but I’ve simplified everything . . . I feel like I’ve figured out a way to manage my time better and what needs to be addressed and what doesn’t. I’m comfortable. I got back to 2012. Yes, I won five times, but I think I missed five cuts that year; 2014, I had the wins, yeah. But in terms of just the run of golf, I think this is the best start to a year I’ve probably made and I think I’m on a really good path. I just want to keep on going.”

McIlroy has a week off – instead focusing on interior design issues – and so misses this week’s Valspar Championship where Graeme McDowell and Seamus Power are the two Irish players in the field. On the LPGA Tour, Stephanie Meadow plays in the Founders Cup in Phoenix, Arizona.